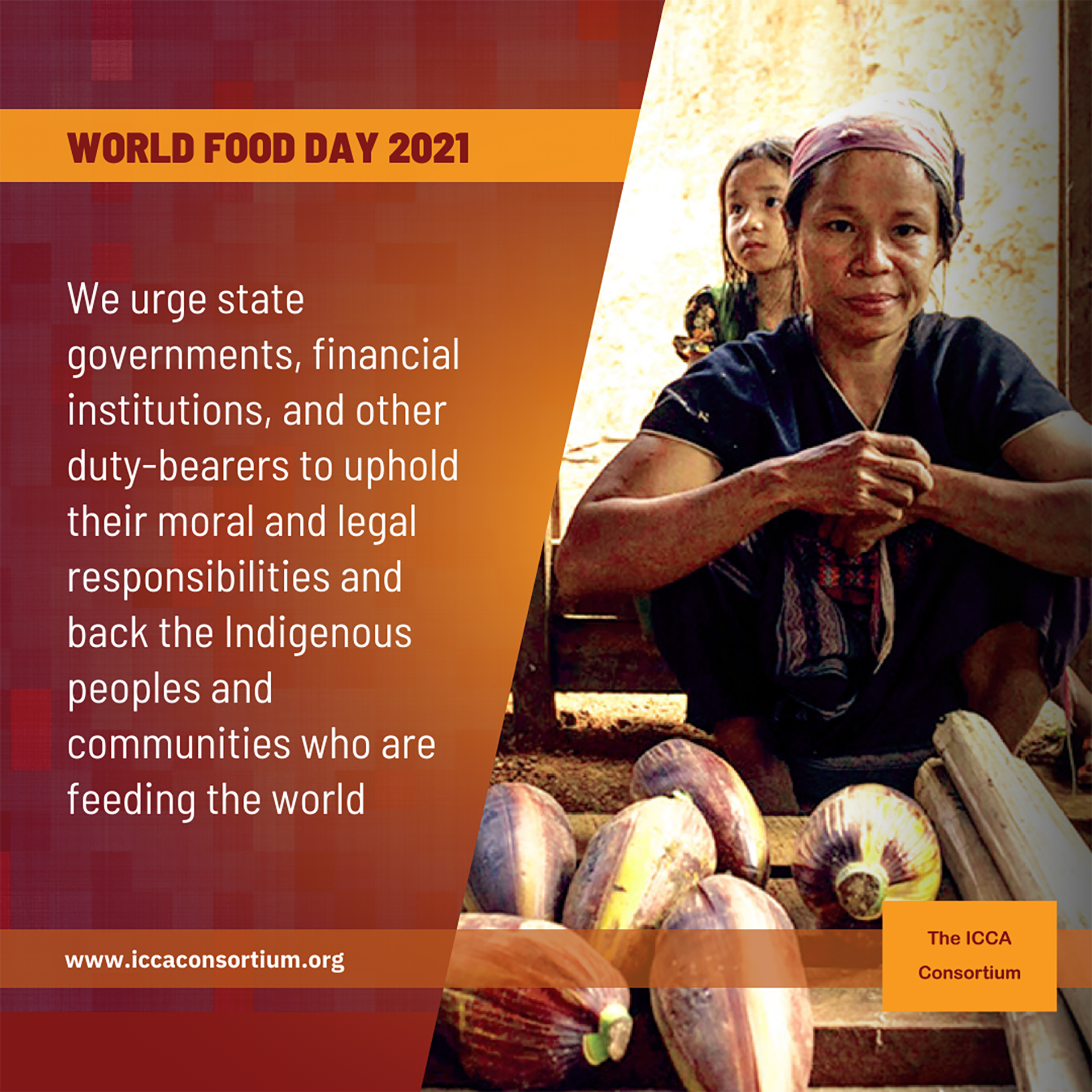 The 16th of October is World Food Day, with the theme of “Our actions are our future: better production, better nutrition, a better environment, and a better life.” This year’s commemoration comes amid unprecedented global challenges aggravated by the impacts of the COVID-19 pandemic and the planetary crises.

The ICCA Consortium stands strongly in solidarity with Indigenous Peoples and local communities striving for food sovereignty and sustaining their territories of life, sometimes against all odds. It is crucial to appropriately recognize and support these systems in situ and halt the industrial drivers of biodiversity loss that are undermining them.

In a recent solidarity exchange, Noemi Gualinga of the Kichwa People of Sarayaku spoke about Kawsak Sacha, a powerful self-declaration of their territory as a living forest. Their life plan is based on non-monetary criteria of wealth, emphasizing a healthy territory free of contamination and land that is productive and abundant, providing all they need for food, housing, medicine, crafts, and more. This shows how food sovereignty systems are often intertwined with processes of self-determination, self-governance, and decolonization.

In addition to threats from industrial food systems, Indigenous Peoples’ and local communities’ food sovereignty systems are also undermined by exclusionary conservation initiatives that restrict their mobility and access to resources.

While Indigenous Peoples represent only five percent of the world’s population, they conserve a significant portion of the world’s lands and are often disproportionately affected by ecological and climate breakdown. Adding to a growing body of evidence such as the Local Biodiversity Outlooks and IPBES global assessment, the ICCA Consortium published a major report in May that underscored the critical importance of recognizing and supporting Indigenous Peoples’ rights, territories, and governance systems for equitable and effective conservation.

“There are strong linkages between food systems and Indigenous peoples’ rights over their natural resources. Indigenous communities’ daily dietary needs entirely depend on natural resources; fencing off their protected and conserved areas deprives them of their basic human right to live.”

Last month, the United Nations organized its first-ever Food Systems Summit. It could have been an opportunity to shift public perception and political will in favor of Indigenous and localized food systems, which feed at least 70% of the global population.

Instead, as many human rights experts, small-scale food producers, and civil society organizations have pointed out, the summit agenda was dominated by large corporations who have profited for decades from unsustainable industrial farming and food production.

Despite huge investments, the UN Food Systems Summit 2021 was a lost opportunity because it did not center Indigenous peoples, pastoralists, family-based farmers, artisanal and small-scale fishers, and other small-scale food producers. Genuine support for food sovereignty systems would mean upending the status quo and recognizing and respecting these groups’ worldviews, rights, and leadership in decision-making processes that affect them.

Food sovereignty aims to guarantee and protect people’s space, ability, and fundamental right to define their production models, food distribution, and consumption patterns. It comes from communities’ relationships with and rights over their collective lands and territories and dynamic agroecological practices, which enable sustainable agriculture and land uses that reduce carbon and ecological footprints. Food sovereignty seeks to re-Indigenize and re-localize as much as possible the production, processing, distribution, and consumption of food in any given territory.

Food sovereignty is about much more than just being free from hunger; it is about Indigenous Peoples and local communities sustaining their cultures and the lands and territories that enable flourishing food systems, which in turn sustain them in cyclical relationships. Through their self-determined systems of governance and stewardship, their territories of life provide abundant and nutritious food and livelihoods for themselves and many others nearby by building upon Indigenous and local knowledge and skills and working with, rather than against, the bounties of nature.

Evidence shows that if the territories of life of Indigenous Peoples and local communities are effectively sustained and defended against threats, they foster and promote food sovereignty around the world, far beyond their boundaries. Recent scholarship documents that more than 50% of the terrestrial surface is under some form of customary collective tenure or claim and, according to FAO, smallholders still produce at least 70% of the world’s food.

On World Food Day 2021, we must draw attention to the fact that corporate-led industrial and intensive agriculture is fundamentally unsustainable. Industrial food production and food chains are broken and negatively impacting sustainable, localized food systems, public health, climate, and biological and cultural diversity.

The UN Food and Agricultural Organization (FAO) and governments worldwide must prioritize this and appropriately recognize and support Indigenous and localized food systems, including through secure territorial and tenure rights, culturally rooted resource distribution and financing for community organizations, and elimination of perverse incentives for industrial drivers of biodiversity loss.

There is growing international recognition of the rights and leadership of Indigenous and local food producers, peasants, pastoralists, fishers, and smallholders, including through the UN Declaration on the Rights of Peasants and Other Rural Workers, the FAO Voluntary Guidelines on the Responsible Governance of Tenure and for Securing Sustainable Small Scale Fisheries, and the development of the right to food. Powerful social movements for food sovereignty are pushing for transformative changes as well as more inclusive, representative, and effective local-to-global policy processes such as through the FAO’s Committee on World Food Security.

We urge state governments, financial institutions, and other duty-bearers to uphold their moral and legal responsibilities and back the peoples and communities who are feeding the world. As grassroots movements are coming together to address our planet’s interconnected crises, the time is now for urgent actions to support Indigenous Peoples’ and local communities’ food sovereignty systems and territories of life.

* The term ‘ICCAs—territories of life’ describes the territories and areas collectively governed, managed, and conserved by custodian Indigenous Peoples and local communities