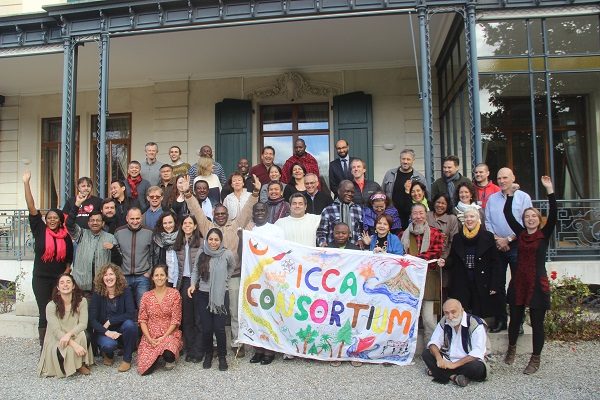 On 25-26 November 2017, the 11th General Assembly of the ICCA Consortium took place in Geneva, Switzerland. It gathered 60 participants from four  continents, including about 36 Members and 50 Honorary members.

The General Assembly is a crucial moment for the ICCA Consortium’s membership to gather, assess the finishing year, set their work directions for the forthcoming one and renew the bond among Members. This year, Africa and Europe were the most represented as the General Assemblies of the two past years were held in Latin American countries.

The Consortium Members reviewed the Programme Report 2017,the report on the on-going implementation of the new strategic plan and the communication and membership reports.   They also approved two Treasurer’s reports, and the 2018 preliminary work plan and budget. Lastly, it was decided to rename the “Steering Committee” as “Council”.

During the second day of the Assembly, an inspiring discussion took place focusing on the Consortium’s policy for “ICCAs as No Go zones for destructive industries”, with inputs from Ms. Vicky Tauli-Corpuz, UN Rapporteur on Indigenous Peoples’ Rights, Prof. John Knox, UN Rapporteur on Environment and Human Rights and Mr. Trevor Sandwith, director of the IUCN Protected Areas Programme. The exchanges were rich, and brought to light the need to consolidate the policy before its formal approval (more information on this is forthcoming). Following that, Mr. Andrès del Castillo, from DOCIP, provided a context to the UN Forum on Business and Human Rights, in which a large ICCA Consortium delegation was to participate in the following days. The GA was also an occasion to discuss the use of videos as part of our communication strategy, In 2018 we expect to produce some specific videos in collaboration with Life mosaic and the New Media Advocacy Project (we encourage you to check their web sites).

Before the General Assembly, two meetings were held specifically on Africa. The first was  a 3-day meeting for French-speaking African delegates, which gathered our regional coordinators for Marine and Coastal Ecosystems of West Africa, Forest Ecosystems in Central Africa, the Sahel region, the co-coordinator for Africa, the Council representative for francophone regions and secretariat to meet, share experiences andplan together for future work. This event was followed by a workshop on November 23rd, focusing on ICCAs in Africa. This workshop, organised within the framework of the ICCA-GSI initiative, provided an opportunity to discuss cases of emblematic ICCAs, while offering perspectives on ICCA situations in various African countries in the light of recent successes and setbacks, and in view of the outcome of the Sydney World Parks Congress and related CBD decisions. The workshop encouraged participants to develop a broad agreement on crucial steps for the full and effective recognition and support of ICCAs in Africa, beginning with concrete actions in 2018, but also envisaging longer-term plans.

The third event in the series pre-GA was a community conservation event focusing on experiences and initiatives in Switzerland, hosted by the Consortium in partnership with Pro Natura, IUCN and the City of Geneva.

The event was held at the Geneva Museum of Natural History and addressed community conservation issues against the backdrop of the experiences acquired in the Parc Jura Vaudois and Parc Gruyère Pays d’Enhaut, two regional natural parks located near the city of Geneva. Following the GA, the ICCA Consortium participated in the United Nation Forum on Business and Human Rights on November 27-29, 2017. In this occasion, it co-led the side-event “Building bridges for Indigenous Peoples’ access to remedies to address human rights impacts of multinational industries in the Americas”, and the snapshot session: “NO GO” in community conserved territories and areas – a policy whose time has come, or a pie in the sky?”  The UN Forum also provided us with the opportunity to strengthen ties with new allies, such as Frontline defenders.