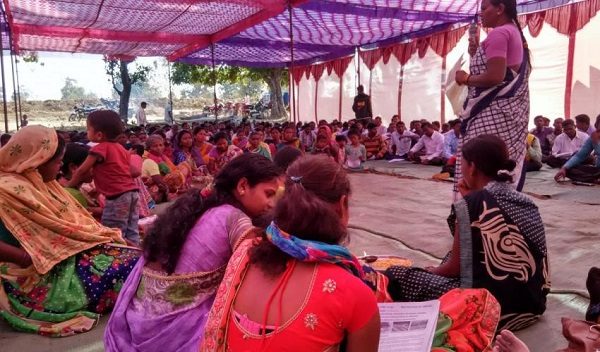 Article directly extracted from the IUCN CEESP website
By Stan Stevens, ICCA Consortium Auditor of the Accounts and Senior lecturer of the University of Massachusetts,
and Neema Pathak Broome, Kalpavriksh  and ICCA Consortium Regional Coordinator

The recent decision by the India Supreme Court, now temporarily suspended for four months, has enormous potential ramifications for conservation, livelihoods, and rights in India’s protected areas and other forest lands. If last month’s order is implemented, it could immediately evict nearly two million households – as many as ten million people – many of them members of scheduled tribes and other traditional forest dwellers (OTFD), whose rights the Forest Rights Act of India 2006 was intended to affirm.

The India Supreme Court’s interim order on the 13th of February 2019 responded to a complaint filed by a few conservation groups in India who challenged the constitutional validity of the Scheduled Tribes and Other Traditional Forest Dwellers (Recognition of Rights) Act of 2006 (Forest Rights Act).  The recent arguments in the Court have diverted from the original complaint, leading to the interim order seeking the eviction of many individuals and communities who have not been able to secure recognition of their rights under the Act.  Among those impacted would be some of India’s most vulnerable adivasis (indigenous peoples) and OTFDs, such as the pastoralist and nomadic communities, dalit (scheduled caste) communities, women (particularly single women), and religious minorities.  Their claims are either still pending in large numbers or have been rejected on various faulty grounds, as has been admitted by the Ministry of Tribal Affairs (MoTA) itself.  The Supreme Court order will worsen the harassment, imprisonment under forest offences, sexual violence and atrocities that these communities are already facing, while legitimizing the ongoing illegal evictions and relocation of people from protected areas and other forest lands, including areas with proposed forest diversion for industrial projects and proposed wildlife conservation projects. It is important to note that the 2006 Forest Rights Act itself lays down an exhaustive legal process for verification, recognition and review of claims.  These legal provisions have been further clarified through various guidelines by the MoTA and circulars from state governments, which include detailed procedures for remand, review and appeals in cases of so-called “rejected” claims.  The constitutional challenge to the Act projects a false dichotomy between the rights of the forest dwelling communities and achieving conservation goals, while remaining silent on a staggering figure of a minimum of 1,519,167 ha of prime forests having been diverted for industrial purposes since the 1980s.

Forest diversion remains amongst the most serious challenges to conservation in the country today. Moreover, most of these forests are being diverted despite local communities’ opposition and in violation of their free, prior, and informed consent as is required under the Act.  The continued resistance of the local communities, including through their assertion of their rights under the Act, is one of the strongest reasons why many forest diversion proposals have been challenged and more forests are not being diverted and destroyed across the country. The challenge to the Act also ignores and discredits the long history of conservation by local communities in India and their continuing conservation efforts (https://kalpavriksh.org/cca-map/).  Many of these communities and thousands of other tribal and non-tribal traditional forest dwellers have legally strengthened their right to use, govern, manage, and protect their traditional forests using the provisions of the Act.

The threatened evictions and the challenge to the constitutional validity of the 2006 Forest Rights Act leading up to the Supreme Court’s interim order highlight the continuing limited implementation in India of the “new paradigm” of conservation and protected areas that was endorsed in the 2003 Durban Accord, the outcome document of IUCN’s Vth World Parks Congress in Durban, South Africa.  The new paradigm has since been elaborated by the IUCN and the Convention on Biological Diversity (CBD) in a substantial body of law, policies, and guidance. Among other things, the new paradigm calls for rights-based conservation, equity, good governance, and recognition of indigenous peoples’ and local communities’ conservation contributions.  Victoria Tauli-Corpus, the UN Special Rapporteur on the Rights of Indigenous Peoples, has been one of several advocates of rights-based conservation who have called attention to the slow and uneven implementation of the new paradigm, including identifying it as a key issue in her 2016 thematic report on conservation and rights to the UN General Assembly.

The situation in India is a reminder of the urgent need for ensuring greater awareness and effective national-level implementation of IUCN policy and guidance, decisions by the Parties to the CBD, and the CBD Programme of Work on Protected Areas (PoWPA).  Particularly pertinent are those laws, policies, and programs concerning rights-based conservation, the significance of affirmation of human rights for protected area equity and good governance, and appreciation of the importance for protected and conserved areas of the conservation outcomes of indigenous peoples’ and local communities’ worldviews, knowledges, institutions, and practices.

The Indian Supreme Court clearly did not take into account relevant international law and policy in its recent ruling on the Forest Rights Act case.  This contrasts with recent judgments by some other courts, including the Inter-American Court on Human Rights (IACHR) in its 2015 decision in a case concerning the exclusion of indigenous peoples from their traditional territories that are now within three protected areas in Suriname (Kaliña and Lokono Peoples v. Suriname).  In that case the decision by the IACHR drew on expert testimony by Victoria Tauli-Corpuz, the UN Special Rapporteur on the Rights of Indigenous Peoples, about current international environmental and human rights law and policy, including IUCN and CBD positions on indigenous peoples, local communities, and protected areas.  The government of India, particularly the Ministry of Environment, Forests and Climate Change (MoEFCC) and the MoTA, did not bring these important international conservation and human rights laws, policies, and treaty obligations to the notice of the Court.

The Supreme Court decision also highlights the consequences of lack of fair and effective implementation of the 2006 Forest Rights Act. The Act created a process for recognition of Community Forest Resources rights over collective lands within protected areas and other forest lands that include rights and responsibilities to use, manage, and conserve forests.  Such recognition of community governance and management of forests both within and outside protected areas is a means for remedy and redress for lack of recognition of indigenous peoples’ and local communities’ collective tenure, sustainable forest uses, and the conservation outcomes of their collective forest governance and management.

Effective implementation of the 2006 Forest Rights Act was identified as a potential means of advancing the objectives of WCC Resolution 6.030 in a 2016 ICCA Consortium Policy Brief, ICCAs and Overlapping Protected Areas: Fostering Conservation Synergies and Social Reconciliation on this subject (see the case study of ICCA recognition in the Biligiri Rangaswamy Temple Tiger Reserve on page 8.)

Relocation of tribal and other traditional forest dwellers nonetheless has continued from various protected areas across India, in violation of the provisions and spirit of the Act.  The further evictions that are now threatened include many communities that should qualify for recognition of rights under the Act, but which have not been able to obtain them due to lack of due process and assistance from the state in generating appropriate evidence.

There is an urgent need for the government of India to respect and implement its own commitments under the international conservation and human rights conventions and to ensure that these are effectively communicated to and used by all concerned to safeguard the rights of tribal and other traditional forest dwellers, including their rights to conserve, sustainably use, and protect forests.  This would advance full and effective implementation of the 2006 Forest Rights Act and ensure that all efforts to scuttle or dilute the Act are sufficiently deflected.