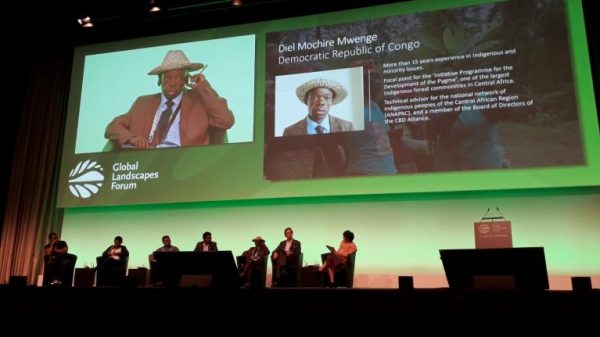 By Vicki Brown from Forest Peoples Programme, Member of the ICCA Consortium.
Directly extracted from this online article of the FPP webpage

[On 22 June 2019] in Bonn, five environmental and human rights defenders gathered on stage at the Global Landscapes Forum to share stories of the threats that they and their communities have faced while defending their lands. The speakers came from the Democratic Republic of the Congo, Colombia, India and Indonesia, but their stories were alarmingly similar. Across the world, indigenous and human rights defenders are being attacked, harassed, criminalised and killed. They are being evicted from their land in the name of conservation, or to make way for agribusinesses and mines. And although national and international laws exist to protect them, these are not being enforced. As a stark example of the danger these local communities face on a daily basis, a sixth defender was unable to join the event today due to rising levels of violence around his community preventing his travel.

The first speaker was Geovaldis Gonzalez Jimenez, from the region of Montes de Maria in Colombia, where corruption and land grabbing are posing huge threats to indigenous and Afro-Colombian peoples. During his shocking account, he recounted how 566 community leaders have been killed in Colombia – 135 in 2019 alone. “This is the horrible fight we have to experience every day in our communities,” he explained. “We need justice to fight corruption. Even where there are laws, they are not enforced. We will keep fighting; with the help of God we will be able to develop our country and our region.” Alba Rocio Rueda Parra, also from Colombia, agreed with Geovaldis. “The government in Colombia tells the world that everything is ok, but it is not. Many leaders have been killed and continue to be killed [defending their territories]. That is unfair. I ask the UN, I ask the world to help us.”

In Papua, Indonesia, the lands of indigenous peoples and local communities are being destroyed by oil palm plantations. As community leader Father Anselmus Amo explained, wildlife does not live in these plantations; it needs the forest in order to survive, and so, too, do local people. “The animals, natural medicine and clean water sources are gone. And with them, happiness is gone.”

Gladson Dungdung was born into the struggles faced by many of the 100 million indigenous peoples in India. His family was evicted from their land in the year he was born, and his parents were killed 10 years later. A Supreme Court ruling in India from February this year (currently under a short stay) threatens evictions for over a million forest-dwellers. Given the huge number of people potentially affected by this ruling, he says, “If the plans of the government are implemented, it will be a genocide.”

Hunting and gathering are still practiced by many forest peoples across the Congo Basin. Diel Mochire Mwenge, an indigenous rights defender from the Democratic Republic of Congo, says that the destruction of the forests is a real danger to the cultural identity of these peoples. “When it comes to cutting forests, everyone know we cannot live without them. Disappearing forests will disappear us.”

Asked to propose solutions, the participants agreed that there were some laws in place to protect them at the national and international level. However, they revealed that these laws are simply not being upheld. “At the local level in order to avoid further victims, these laws need to be respected by all in the government”, said Diel. Gladson echoed this, “No legal action can be taken against the perpetrators.” But there were other proposals too, at all levels. Geovaldis called on the inclusion of young people who, he said, were leaving the forests to seek work in the cities. “”There are no young peasants in my region. People have to fall in love again with the earth, with the land, we have to do a lot of work with young people.” For this reason, Alba Rocio said there was a project in her region to create a school, in order to educate and empower local youths.

Diel, meanwhile, called on the UN to do more to really understand the situation on the ground. The Special Rapporteur on the Rights of Indigenous Peoples should not just come and speak with the DRC government, he said – rather, she should come and visit the communities, so that she can convince the government of the need to act.

On one theme, however, all the speakers were unanimous – the destruction of these landscapes affects everyone. As community members and defenders, they are at the forefront of the struggle for land rights and the environment – but with growing recognition of the climate crisis and the loss of forests across the globe, this is an issue that we should all be fighting for. As Geovaldis said, “our community leaders are putting their lives at risk to defend the world – we want the world to join forces.” Gladson agreed. “We are also fighting for you. Everyone’s future depends on our fight.”