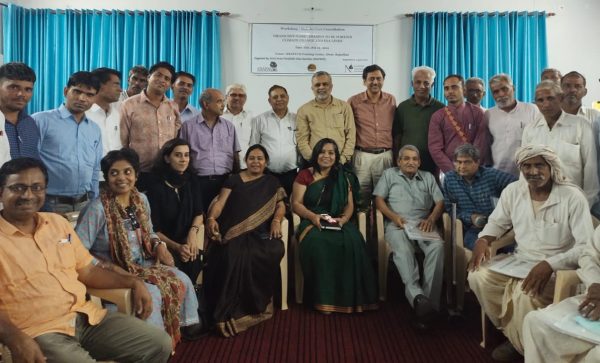 KRAPAVIS is in the process of developing conservation and management strategies for Orans (community conserved areas- ICCAs) and carrying out mapping of ‘Orans/Dev-vans’  using modern tools such as GIS (Geographical Information Systems). In addition, we are completing an assessment of the biomass productivity of the Orans/Devbanis with a view to the optimum utilization of the available biomass, including suitable soil and water conservation measures for the sustainable use of these natural resources.

About a year ago, (on 03/07/2018), the Supreme Court (SC) of India issued an Order declaring all Orans to be ”deemed forests”. If implemented, this Supreme Court Order would go a long way toward providing much-needed protections for these community forests as they face pressure from encroachment and mining. Therefore, in order to persuade the Government to implement the SC’s order, the consultation group “Orans/ Dev-vans; Deemed to be Forests; Climate Change & EbA links” was organized. More than 68 people, including representatives from communities, forestry research and other research institutions, universities and colleges, the Forest Department, the ‘Rajasthan State Biodiversity Board’ (RSBB) NGOs, and governmental agencies met and unanimously created a mission statement. . This consultation group/workshop was organized by KRAPAVIS with the support of Rohini Nilekani Philanthropies, and in collaboration with RSBB, at KRAPAVIS’ Oran training Centre Alwar, on October 18-19, 2019.

At the close of the workshop, the group announced the statement of its intent to promote the conservation and management of Orans and to pressure the local government to implement fully, and in a timely manner, the Supreme Court’s Order on Orans.

1. It becomes the duty of all global citizens to protect and restore this Sacred natural & cultural heritage sites for Prosperity and Posterity. It is in line with the National Forest Policy regarding the need to increase green cover for the country

2. The Oran and the community are inseparable entities

4. Although the Oran and Dev Vans are a very important part of the rural wilderness landscape, they are poorly documented in Land records of the State. In order to effectively intervene and protect or develop the areas, this needs to be addressed.

5. Prominent Orans in all the districts should be listed and the list provided to the Forest Department, with the goal of having them declared “deemed forests” as directed by the Honorable SC.

6. The declaration and management of community reserves for protecting Fauna, Flora (Biodiversity) and traditional conservation values and practices should be made clear.

7. The Supreme Court’s decision envisaged the forming of expert committee consisting of representatives from the Forestry Department, AFRI, CAZRI, representative of various departments and experts, who would identify and document the Orans. This should be implemented in letter and in spirit. It was decided that KRPAVIS, as an experienced NGO working on Orans, should have a key role in the committee, and there should be a separate administrative body (Board) for dealing with the management of Orans.

8. Any doubts and concerns of the community should be addressed in the process of declaring the Orans as deemed forest

9. The goal should be to create synergy between all of the Departments and the community in the managements of the Orans

10. Rural Employment programmes like MNREGA should be extensively used in order to protect and develop these Orans. There should be convergence with government initiatives and accountability

11. A strong Policy framework should define the roles and responsibilities of Government, NGO’s and the Community in the protection, conservation and sustainable use of Orans.

12. The government and the Forest Department will be urged to immediately implement the Honorable Supreme Court’s orders. A time frame and road map for this will be prepared to carry the task to completion.

13. The community’s continued ownership of the Orans will ensure its continued participation in the day-to-day management and protection of the deemed forests.  Any change in ownership would create the danger of losing community support for the conservation of these Orans.