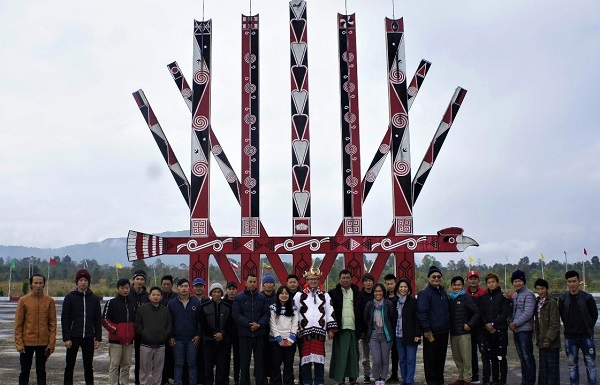 On a cold winter day on 20 January, 24 young male members of the Rawang tribe in Myanmar eagerly learned the basics of mapping and conducting a natural resource inventory. Their trainers, Dave de Vera of the ICCA Consortium Council of elders and Kail Zingapan of the organization PAFID (ICCA Consortium Member) from the Philippines, patiently shared their expertise on mapping and documenting ICCAs to their eager students. The training was part of the ongoing capacity building initiatives of the Rawang Youth group to increase their skills in mapping and documenting their territories in line with their aim to achieve recognition by the government of Myanmar and also globally.

The participants learned the steps needed to register their territories and get formal recognition. More importantly, they discussed the challenges and strengths of their ICCAs and how they can improve their conservation in collaboration with other organizations, including the Union Government of Myanmar.

“I learned that ICCA is not a new thing. It is in fact what we been practicing in ‘Døngpvngzøng rìò roqgar rvgaq,’ our ancestral land, as passed to us by our ancestors,” says Aung Dan, a member of the Rawang Youth group. “Our territory is rich in biodiversity and culture that is why it was declared as national park and wildlife sanctuary by the Myanmar Government. However, many of the Indigenous peoples living here felt that there was not enough consultation when the protected areas were declared. That is why we would like to register and have our territory recognized as an ICCA by the government. Our traditional governance and management practices should be considered in its conservation”, he added. The Rawang communities and their territories of life

In Puta-O, in the far north of Myanmar, Rawang people have lived and been part of the environment for generations. Puta-O is famous throughout Myanmar for its beauty of being surrounded by snowcapped mountains and for Hkakaborazi, the highest mountain in Myanmar.

Throughout Puta-O and surrounding areas, local communities have depended on sustainably harvesting forest products for as long as communities can remember. Rawang people have travelled to the snow areas in Puta-O to find non-timber forest products for use as traditional medicine and to hunt local animals for food. They depend on these areas for their livelihoods, which rely on trading non-timber forest products. Each generation works to protect the areas for future generations to harvest and survive. At the same time, Rawang communities have traditional practices and a governance system to conserve and manage their traditional village area and boundaries. Their way of life is rooted in a strong connection with their forests and other natural resources. The forest is their home, where all of their subsistence needs can be met through collection of local resources. Hkakaborazi is particularly central to the Rawang people’s traditional customs; in previous times, Rawang families believed that their ancestors’ spirits travelled to rest at Hkakaborazi after their bodies died.

Moreover, the communities have been living in the area for generations, and most of the historically important areas (cemetery, footprints of ancestors on rocks) are still in the area. In addition, they are still practicing traditional agricultural and medicinal practices in the area, where a rich pool of traditional knowledge, practices, and crop diversities still exist. Women carrying firewood for their daily use © Sinwal Peram.

Communities now face new challenges with COVID-19, but they can also adapt better with local lifestyle and customary practices to gather food from the land. Many local families have traditional practices to protect food security such as gathering food from the Ah Lay and U Lai trees to produce powder for daily food when food is scarce to find. Preserving these traditional practices and this environment helps communities adapt and respond to shocks such as food shortages and natural disasters. Communities also gather traditional medicine for their health and protection from the forest and snowcapped mountain areas, and medicine from areas with snow such as Hkakaborazi play an important role in local health practices.

The consequences of the establishment of national parks on Rawang communities

In the 1990s, the Myanmar government founded the National Park in Hkakaorazi and Ponkanrazi areas. At first, this was not a problem for community members who lived in the areas for a long time. But then the Myanmar government started to increase restrictions and pressure on local communities to abandon local shifting cultivation practices and to stop them from going to the forest to harvest.

Then, in the 2000s, local youth and community leaders started to discuss their challenges, struggles and worries for the future of living in their native areas because more households are moving to the urban areas and even emigrate to other countries. Many people move because living in the mountain areas has become more difficult since the government and the Forest Department are monitoring them. Over time, local people’s livelihoods became threatened as the Myanmar government restricted local communities more, and at the same time more outside groups came into Puta-O as access improved, harvesting illegally without protecting the land and biodiversity. The situation became even more critical when the Myanmar government then tried to designate the area as a UNESCO heritage site and to expand the national park, which led to community protests in 2017.

The emergence of the Rawang Youth group

Officially, the Rawang youth group was started in 2017 to protect local rights, achieve government recognition of community management of indigenous conserved areas, and improve community involvement in the national park management process. The goal is also to increase community awareness of government programs, as many communities did not give free, prior, and informed consent, and do not understand that they have voice. The youth group also plans to encourage biodiversity conservation and sustainable livelihoods development with the local communities. Local people want to protect the environment and forests too, and they want to make clear that they are protesting against government policy, not the desire to protect local environments and forests. The focus for the organization’s current activities on the Hkakaborazi areas and Ponkanrazi areas is to develop more awareness-raising activities on ICCAs in these communities.

Community mapping to seek better recognition of their territories

One of the biggest programs the Rawang Youth group has accomplished is to do community-involved customary planning with local villages throughout the park area. In each village group, members travelled and worked with other villagers to co-develop participatory mapping for local communities. Community members explained how a mountain or a stream has a name based on a unique story and belief about the areas. These names are used in the Rawang people’s traditional origin stories and are an important cultural heritage. In total, the team visited over 30 villages. Then, group members documented these names and local land use practices to try to get ICCA recognition certificates from the Myanmar central government and international ICCA groups.

In these areas, due to the remoteness, local people face challenges in their daily life such as education, health, and livelihoods. They feel insecure for their life and land as Myanmar develops and the political and economic situation changes. They face new threats from companies coming to claim land for mining and timber extraction, and land speculation for profit.

Moreover, attempts to get ICCA recognition have encountered many obstacles such as limited resources and knowledge, lack of protection for Indigenous peoples’ territory under the Myanmar Forestry and Biodiversity law, and difficulties to engage policy makers to improve the legal situation in Myanmar.

In the future, the organization will continue developing participatory ownership documents and documenting Rawang Indigenous peoples’ territories of life.

Globally, the ICCA Rawang Youth group hopes to contribute to a world where local communities get recognition to manage their land and regenerate their environment. This includes activities to get indigenous recognition under Myanmar’s Forestry Law and Policy, improving local ownership and livelihoods, and protecting the heritage of indigenous territories of life. As one of the most unique biodiversity areas in Southeast Asia, Puta-O could become a model for an indigenous conservation area that protects local plants, animals, and the environment. At the same time, this conservation could protect the water source for the Irrawaddy, the lifeblood of Myanmar, showing people throughout Myanmar the value of protection of the environment by Indigenous peoples.

Two government officials from the Forestry Department also joined the training organized in January with PAFID. It was observed that there was no blaming and complaining from either side. The communities understand the situation of the government’s limitation of human resources. During the feedback session at the end of the training, the participants concluded that cooperation and collaboration between communities and government is important in the conservation of the area.

This was encouraging and allowed participants to see a ray of light for the next step to be implemented in the Rawang’s territory, despite continued hesitation from the government about ICCAs, even as high-level officials have already acknowledged the contribution of ICCAs to biodiversity conservation.

There is still room to increase awareness and appreciation of ICCAs among government staff, particularly ground level staff, so that everybody is on the same page and understands the vision and mutual benefits. Trust building on the ground is therefore very crucial at this stage. Hopefully, the work for the recognition of ICCAs in Puta-O can become one of the best examples of how cooperation and collaboration among communities and government can contribute to achieve the dream of inclusive conservation lead by Indigenous peoples in Myanmar.