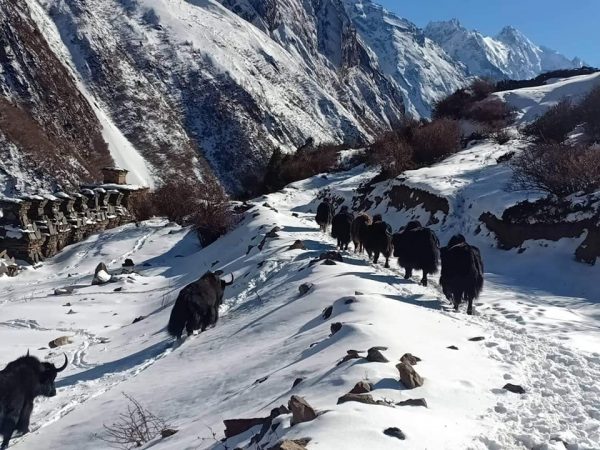 The sacred Tsum territory of life, a biocultural jewel in the Nepalese Himalaya, can now be “visited” by viewing a newly released photographic story. Located in the remote Tsum Valley in the northernmost part of Gorkha district in the Western Himalaya of Nepal, the Tsum region represents an exemplary innovation in biocultural conservation carried out by marginalized mountain indigenous peoples. The valley is the ancestral homeland of the Tsumba people who practice Buddhism and is home to 11 hamlets that make up Chekampar Village (the Upper Tsum) and 22 in Chumchet Village (the Lower Tsum).

The newly released photo story provides, in a quick seven minutes, a snapshot of the Tsum territory of life. It succinctly captures the location, people, bio-cultural features of the landscape, and the institutions and practices of biocultural conservation going a century back – all underscored by a shared declaration of non-violence. In this photo story, we can witness the external and internal threats to the land, and the responses and actions of the Tsumba people, guided by their determination to sustain the Tsum territory of life for current and future generations.

This photo story is the result of 10 days of trekking and a week of fieldwork in the Niley and Chuley villages of the Upper Tsum Valley, in April 2015. This process included personal observations, interviews, and two in-depth grassroots discussions with the Tsumba people concerning the ICCA Resilience and Security Tool. For this reason, the process of creating this photo story had an empowering effect, especially during community discussions when the Tsumba people were able to deliberate and reflect on their nature-culture conservation traditions, as well as on the looming threats to their territory of life. 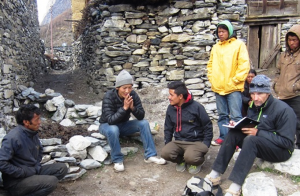 Between 2015 and 2020, fieldwork was followed by a series of consultations with Tsumba community leaders and representatives, along with young members of the community, in Kathmandu, the capital city of Nepal. A first version of the photo story was featured in the 2019 Udaipur General Assembly of the ICCA Consortium, then in a press conference about the 2020 Tsum Shyagya Centennial Festival, and it was shared in a meeting with Tsumba youth in January 2020. This photo story created an opportunity for urban Tsumba youth to reconnect with the Tsum Valley, and it provided an inspiration for these young community members to contribute to the Shyagya event. In the final step, the creators of the photo story gathered inputs from the communities and feedback from Grazia Borrini-Feyerabend, Sudeep Jana Thing and Christian Chatelain of the ICCA Consortium. The project benefitted from the technical help of ForestAction, Nepal; and from Jailab Rai, who volunteered his time and expertise. The final version of the project is now complete. It is our hope that this photo story will make the Tsumba peoples’ profoundly valuable biocultural conservation visible, and that it will generate awareness of, and appreciation for, the Tsumba territory of life.  We wish to bring to the world’s attention the determined, ongoing work of the Tsumba people as they struggle to claim their rights and preserve their culture, a culture founded in a deep respect for nature and nonviolence.

To learn more about the Tsum Valley…