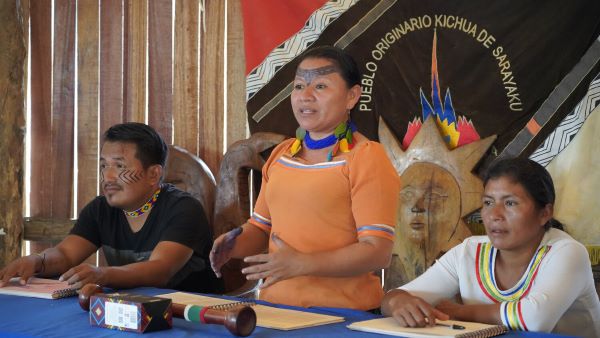 The Kichwa Indigenous People of Sarayaku registered in the ICCA-Territories of Life world registry and requested their registration in the World Database of Protected Areas (WDPA), administered by the World Conservation Monitoring Centre (UNEP-WCMC), on January 28, 2020.

“The Kichwa Indigenous People of Sarayaku have been and will always be a symbol of resistance of the Indigenous peoples of the world because we are Sarayaku runakuna, descendants of the jaguar, of the puma who inhabits the Bobonaza, Pastaza and Marañón basins. Rivers along which the Tayakkuna, bearers of ancient wisdom, navigated naming the places as they passed” says the preamble of the declaration of the Kawsak Sacha or Living Forest.

This is a life proposal for Indigenous peoples. “It is where our kallari rukukuna (ancestors) lived, where we live, where our future generations will live and where the Protective Beings of the jungle will remain,” says Miriam Cisneros, President of the Governing Council of this people known as “the Midday People”. Integrated by 7 community centres in an area of ​​approximately 135 thousand hectares, this territory is a space of great spiritual and cultural importance in the Ecuadorian Amazon. According to the Sarayaku cosmovision, the ecosystem of its territory is formed by three essential ecological units: Sacha (Forest), Yaku (rivers) and Allpa (soil and subsoil) that intertwine and by their existence sustain an infinite number of species and transcendent living beings.

Sarayaku territory, legally recognized by the Ecuadorian State in 1992, is 95% covered by forest in an excellent state of conservation. A great path of flowers or “Sisa Ñambí that, inspired by the vision of the elders, is the inheritance for the younger generations” also delimits it. “It is seen from the sky, from above” says José Gualinga, leader of this indigenous people.

In contrast to this profound philosophy of life, the Ecuadorian State tendered blocks for oil exploitation in the territory of Sarayaku between 2002 and 2003 without consulting the 1,400 people who live there, and authorized the CGC company to install a ton of pentolite in their territory. Thanks to the strength of the women and wisdom keepers, this people’s story is not yet another of pollution and devastation, on the contrary, they have stopped oil drilling plans on their lands and symbolize resistance to extractive commerce based on the exploitation of nature and in violation of Indigenous rights.

The ruling of the Inter-American Court of Human Rights (IACHR) of June 2012 was an historic result, which obliged a series of reparation measures and non-repetition, that the Ecuadorian government had to accept for having authorized the exploitation of crude oil without the consent of the Sarayaku People. After setting this landmark judicial precedent called “Sarayaku versus Ecuador”, higher standards of Free, Prior and Informed Consent were established, but which have not been respected by the Ecuadorian State, as evidenced by the overwhelming victories of the recent judicial proceedings of A’I Cofán de Sinanangoe, Resistencia Waorani and Piatúa Resiste.

The ICCA registry contributes to the recognition of the Midday People

The defence of the territory is not over yet. In 2016, the IACHR verified the breach of three remedial measures. One of them is effective consultation before starting new strategic projects. Therefore, the Midday People exhort the Ecuadorian government to recognize and legitimize the Kawsak Sacha as a living and conscious being, subject to rights, whose vital and legal existence supports and protects the rights of the Indigenous Amazonian peoples and their territories as cultural, biological and spiritual values, fundamentals of the balance of Sumak Kawsay (living well). “Our proposal for life, the Kawsak Sacha, was not written at a desk,” says Abigail Gualinga, young woman and Sarayaku leader. “It is something we feel, that we live and develop from our self-rule. We are sure that this is what will enable our future survival”.

The Kichwa Indigenous People of Sarayaku are already in the ICCA world registry because “our registration as ICCA or territory of life frames the path we have chosen to travel as an Indigenous people” says Dionicio Machoa, coordinator of the Sarayaku Department of Natural Resources. The path of this people to feel, care for and decide about their territory is the full exercise of their right to self-determination. In Ecuador, there are already four territories of life registered in the ICCA global registry through collective processes initiated in 2018 and accompanied by Fundación ALDEA as part of the strategic project «Territories and areas conserved by indigenous peoples and local communities» or «Territories of Life (ICCA) », of the Small Grants Program – SGP / GEF / UNDP. The registered territories of life are Playa de Oro Commune in Esmeraldas, Agua Blanca Ancestral Community in Manabí, the Shuar Arutam Peoples’ territory in the Province of Morona Santiago and now, the Kichwa Indigenous People of Sarayaku.

In this video, made by Waktachick – Sarayaku Communications, youth, girls, adults and elders narrate how the Kichwa Indigenous People of Sarayaku feel, take care and make decisions about their territory, inspired by the vision of their ancestors and following their proposal of life Kawsak Sacha or Living Forest.

If you would like to know more about the Sarayaku people, please check their dedicated webpage on the ICCA registry website.