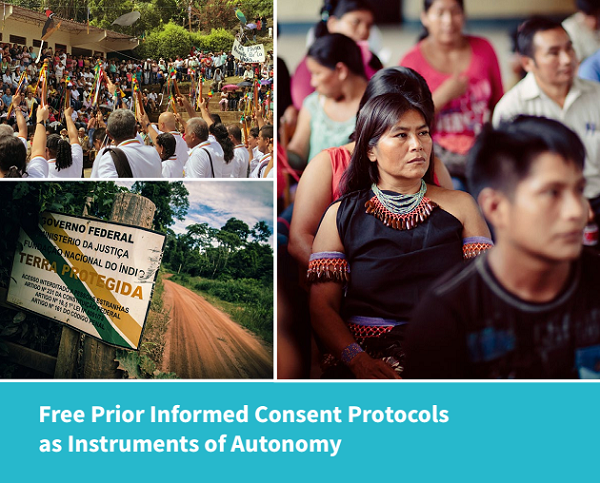 Management and governance of territory are critical to the sustained protection and conservation of natural resources in indigenous territories and lands, and community protocols can play a powerful role in defining and asserting such governance.

A new publication “Free Prior Informed Consent Protocols as Instruments of Autonomy: Laying Foundations for Rights Based Engagement” was released in Spanish in April 2020. It complements the English version launched at the UN Forum on Business and Human Rights in November 2019. In the publication, three different case studies show how Indigenous peoples have developed protocols for decision-making and territorial governance in Latin America. In each case, these protocols have been used to defend the territorial integrity of the lands managed and claimed by the people concerned and regulated the ways in which other actors can interact with those landscapes.

Published by the European Network for Indigenous Peoples, INFOE, Forest Peoples Programme and Middlesex University School of Law with support from the German Federal Ministry of Economic Cooperation, the publication finds that these protocols have made tangible contributions to tackling critical shortcomings in national laws and State and corporate practice, around consultation, FPIC and respect for Indigenous peoples’ self-governance and territorial rights. Case studies contained in the book – from the Wampis (ICCA Consortium Member – Peru), the Juruna (Brazil) and the Embera Chami (Colombia) – show that these protocols can act as tools for resistance and defence of human rights.

Each of these protocols emerges from and embodies the concerned Indigenous peoples’ unique relationship with their traditional territories. They provide externally facing frameworks that enable these peoples to effectively exercise their right to self-governance and to protect, manage and conserve the lands and natural resources that are integral to their ways of life and existence as Indigenous peoples. In the context of Indigenous peoples and local community conserved areas – or ‘territories of life’ – such protocols can provide frameworks for the conservation and sustainable use of biodiversity and natural resources as part of integrated territorial management and self-governance.