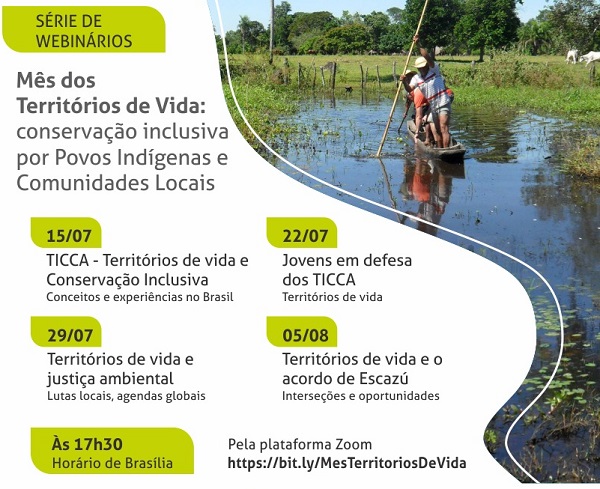 To celebrate “Territories of Life Month” and the commemoration of 10 years of the ICCA Consortium, a series of four webinars on topics related to inclusive conservation and ICCAs were held in July and August in Brazil.

Promoted and organized by Mupan–Women in Action in the Pantanal, Wetlands International in Brazil, the Network of Young Leaders in Protected and Conserved Areas of Latin America and the Caribbean (Rellac-Jovem) and the ICCA Consortium, “Territories of Life Month” addressed the following topics:

Each roundtable had about four panelists, with participation of leaders from traditional and Indigenous communities in each of them. The 200 participants, who came from different regions of Brazil, were able to exchange knowledge and experiences, making possible dialogues from different perspectives.

Having this space to connect ICCAs is of great importance for these peoples, especially in Brazil, which besides facing the global COVID-19 pandemic is dealing with several threats arising mainly from the weakening of laws regarding territories.

Giving visibility to youth struggles for territories of life

It was also an opportunity to raise the voices of young people fighting for the protection of territories and their ways of life. An exclusive roundtable was dedicated to them, composed of Luciano Regis representing the Rellac Jovem Brasil, Julio Fernandes representing Wetlands International and the Youth Group of the ICCA Consortium, Mesaque Rocha from ABINK (Association of Indigenous Brigadistas of the Kadiwéu Nation) and Dione Torquato from the Consejo Nacional Extractivo (traditional communities working with the natural extraction of fruit and other materials).

This roundtable aimed to address several questions, such as the role of youth in the expansion of the ICCA movement, ways in which inclusive conservation and territories of life fit into the youth agenda in regional and global debates and plans, and the search for greater integration of these young people in debates about territories.

Youth representation in decision making is growing. Within Indigenous and traditional communities, there is a constant incentive to professionalize, which adds to traditional knowledge and becomes an additional tool in the fight for the rights of their peoples. That is why it is essential that they have these spaces to speak.

The Mupan – focal point of the ICCA Consortium in Brazil – and Wetlands International see the importance of this role and reinforce the need to increasingly promote these intergenerational gatherings, which have the power to strengthen this youth movement.

The gatherings were also attended by big names in conservation, such as:

Along with the presence of representatives from Indigenous and traditional communities such as:

The webinar was also organized by young people themselves, including Luciano Régis from Rellac Joven and member of the ICCA Consortium’s youth network, Lucas Arruda and Lennon Godoi, from the communications team at Wetlands International in Brazil and Lílian Ribeiro Pereira, Coordinator of Indigenous and Traditional Communities Affairs for Wetlands International in Brazil, Honorary Member, and member of the ICCA Consortium Youth Group.

For recordings of the meetings, visit the webpage of Mupan.