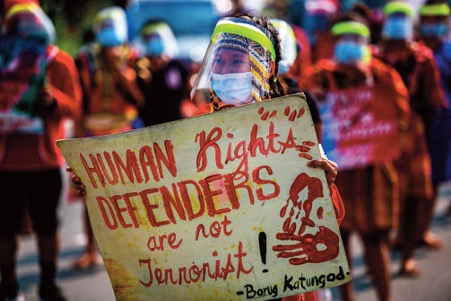 Featured image: An Indigenous student holds a poster that says, “Human rights defenders are not terrorists!” during a demonstration against the Philippines’ Anti-Terrorism in Quezon City on 4 June 2020. Photo: Mark Z. Saludes

Sobering global reports by Front Line Defenders and the UN Special Rapporteur on human rights defenders find that people defending land, environmental and Indigenous peoples’ rights were the most targeted and at risk for both lethal and non-lethal attacks

In February 2021, Front Line Defenders launched its Global Analysis 2020 on the situation of human rights defenders at risk around the world. The report details the physical assaults, defamation campaigns, digital security threats, judicial harassment, and gendered attacks faced by human rights defenders, including women and gender non-conforming individuals. Even though full lockdown measures were implemented in many countries for extended periods of time, at least 331 human rights defenders in 25 countries were killed in 2020, according to information gathered by Front Line Defenders and its partners in the International Human Rights Defenders Memorial.

Colombia in particular not only led the world in number of killings, but also accounted for 53% of all documented killings of human rights defenders, despite – and even because of – lockdown measures. Every year since the adoption of the peace agreement in 2016, Colombia has had the highest number of killings of human rights defenders, amounting to a staggering rate of one killing every 2.5 days. WATCH: Playlist of videos demanding zero violence against Indigenous peoples, compiled by If Not Us Then Who?

These findings were echoed by the UN Special Rapporteur on human rights defenders, Mary Lawlor, whose 2020 annual report focused on death threats against and killings of human rights defenders. She stated that land and environmental defenders and those defending Indigenous peoples’ rights are particularly at risk and vulnerable to attack, for example, people and communities protesting land grabs and objecting to private sector projects imposed by governments without their free, prior and informed consent. One in two victims of killings recorded in 2019 by OHCHR had been working with communities around issues of land, environment, impacts of business activities, poverty and rights of Indigenous peoples, Afro-descendants and other minorities.

Special Rapporteur Lawlor also underscored the collective and multi-faceted nature of protection and defence of Indigenous peoples and their territories. “The protection of environmental human rights defenders, including indigenous peoples’ leaders and defenders, is inherently linked to the protection of their communities and peoples. It can only be fully achieved in the context of a holistic approach that includes the strengthening of democratic institutions, the fight against impunity, a reduction in economic inequality and equal access to justice” (2020 annual report, para. 54).

To learn more about alerts raised by Indigenous peoples and communities in the ICCA Consortium’s membership, visit: https://www.iccaconsortium.org/index.php/category/alerts-en/

Featured image: An Indigenous student holds a poster that says, “Human rights defenders are not terrorists!” during a demonstration against the Philippines’ Anti-Terrorism in Quezon City on 4 June 2020. Photo: Mark Z. Saludes