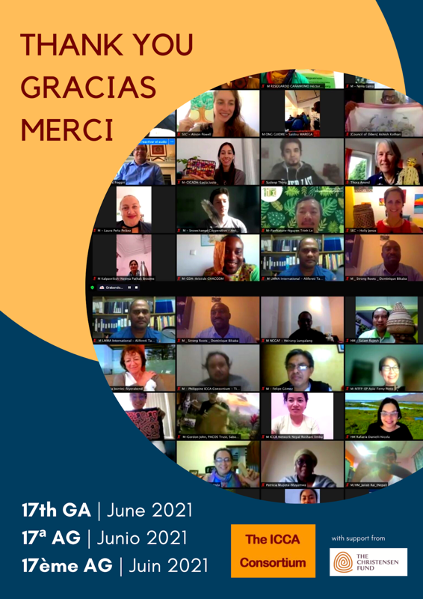 The ICCA Consortium held its 17th General Assembly (GA) online for the second year in a row due to the continuing COVID-19 pandemic. Although virtual assemblies come with their own challenges and drawbacks, they have also enabled more people from the membership to participate than is usually possible with in-person GAs. This year, more than 200 unique participants (including 81 Member organizations and at least 55 Honorary members) from 57 countries joined the GA. It had simultaneous interpretation in English, Spanish and French, thanks to the kind support of The Christensen Fund.

A defining feature of the ICCA Consortium is that decisions are taken by consensus. After learning from experience at the 16th GA in 2020, the Council and Secretariat developed a better process for gathering inputs from the membership on key organizational documents and for building consensus in the weeks and months before proposed decisions were tabled for approval. During the GA, the Chair (President Teddy Baguilat) ensured the membership understood how decisions would be taken by consensus and ensured consistency in that procedure throughout the GA. Although further improvements can still be made, these were important steps forward for inclusive and collective decision-making in the association. This improved process enabled a more thorough review, debate, and revision of proposed decisions in advance and enabled the membership to take decisions by consensus relatively quickly during the GA itself.

A new addition this year was a number of video “Member Spotlights”, which featured powerful initiatives of Indigenous peoples and local communities from around the world. These included experiences with Indigenous self-determination and decolonization in Taiwan and globally; the development of a national TICCA network in Colombia; advocating for a new law on Indigenous peoples in the Democratic Republic of the Congo; defending the Salween Peace Park against violence and the military coup in Burma/Myanmar; and successfully resisting a proposed military installment in the highlands of Sinjajevina, Montenegro. The serious nature of the discussions was also complemented by fun activities such as a scavenger hunt, a dance break, and the development of an online map of participants.

The minutes of the 17th GA, with links to all presentations, are available here (PDF file).

A highlight reel of the ICCA Consortium’s 17th General Assembly from 8-10 June 2021 and a social event hosted by NTFP-EP on 11 June. Credit: Diana San Jose/ICCA Consortium