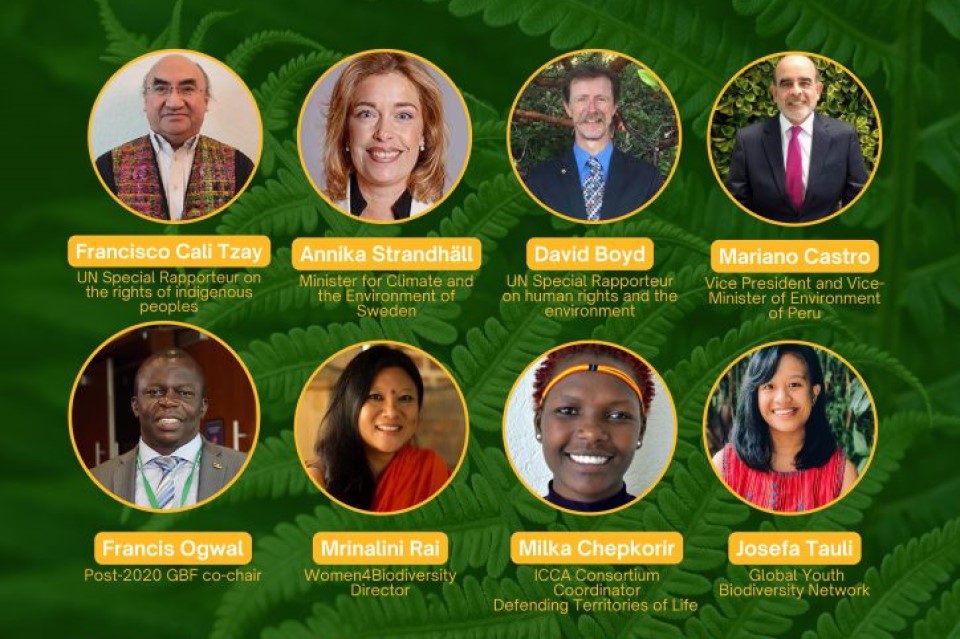 In the desire to conserve biodiversity for current and future generations, organizations, individuals and communities are engaging in discussions on how to ensure the next global biodiversity framework addresses issues missed in the past. In conjunction with the 5th session of the UN Environment Assembly from 28 February to 2 March, a side event explored the notion of reimagining conservation with the international community, focusing on integrating human rights into the development and implementation of the post-2020 global biodiversity framework. Among the co-convenors and speakers were several ICCA Consortium Members and Honorary members, including Forest Peoples Programme, Natural Justice, Mrinalini Rai, and the author (Milka Chepkorir), as well as partner SwedBio. Ameyali Ramos (International Policy Coordinator, ICCA Consortium) also contributed to a short video compilation filmed during the World Conservation Congress in 2021.

Still in its first draft, the post-2020 framework is being reviewed to align it more towards recognition of human rights generally and the rights of Indigenous Peoples, youth, and women more specifically. (Intersessional negotiations under the UN Convention on Biological Diversity will resume in-person this month in Geneva for the first time in more than two years.) During the UNEA side event on 28 February, Francis Ogwal (Co-Chair of the Open Ended Working Group on the post-2020 framework) indicated that a proposed new section B.bis will be key in respect of Indigenous Peoples’ and local communities’ rights, stating:

“The framework will be implemented respecting human rights, the rights to a clean, safe, healthy and sustainable environment, the rights of Indigenous Peoples and Local Communities (IPLCs), women and girls and youth tenure rights as well as the right to Free Prior and Informed Consent (FPIC) is fundamental for the Framework”

In the event, Indigenous speakers called for the framework to include specific indicators to strengthen the accountability of State Parties to recognize and protect Indigenous Peoples’ rights. Josefa Cariño Tauli (Global Youth Biodiversity Network and co-chair of the ICCA Consortium’s youth group) emphasized the need to ensure the voices of Indigenous youths are heard in this preparatory process and in the implementation of the framework.

“Ensure women and girl’s equitable access and benefits from conservation and sustainable use of biodiversity, as well as their informed and effective participation, at all levels of policy and decision making process related to biodiversity”

Overall, the post-2020 framework needs to recognize the outsized role of Indigenous Peoples and local communities in conserving lands, waters, and resources around the world and learn from how they do so through their cultures and ways of life, rather than evicting them off their lands in the name of conservation. This should also consider other key aspects within communities like gender equality and women’s rights and the rights to clean water and a healthy and sustainable environment, all of which do not have to be – and should not be – “taken” from Indigenous Peoples and local communities in order to “give” to others.

#StopTheSlapp: The ICCA Consortium joins call to drop defamation suit against SAVE Rivers