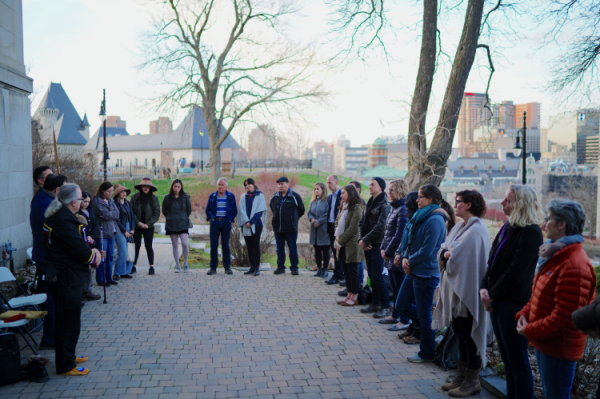 The ICCA Consortium is proud to be a partner in the Conservation through Reconciliation Partnership, which aims to support Indigenous-led conservation in Canada, including through Indigenous Protected and Conserved Areas (IPCAs). Several ICCA Consortium Members and Honorary members are closely involved in the Partnership as part of the leadership team, Elders and Knowledge-Holders Senate and network of Indigenous and non-Indigenous community and research collaborators across Canada.

The following news release to announce the launch of the Partnership was originally published by the Indigenous Leadership Initiative.

23 July 2019 – GUELPH, TURTLE ISLAND – A historic partnership in support of the conservation of traditional lands and waters by Indigenous Peoples is among a number of projects to receive funding from the Social Sciences and Humanities Research Council (SSHRC). The announcement was made last week [mid-July 2019] by Kirsty Duncan, federal minister of science and sport. The Conservation through Reconciliation Partnership (CRP) will receive $2.5 million with additional funds and in-kind support provided by the University of Guelph, Indigenous organizations and the conservation sector in Canada. The partnership is unique globally in that it demonstrates strong collaboration amongst Indigenous nations and organizations, university-based researchers and conservation agencies and organizations, all united in their commitment to strengthening conservation in Canada.

The Conservation through Reconciliation Partnership (CRP) is an Indigenous-led initiative that involves more than 30 Indigenous and non-Indigenous community and research collaborators from across Canada. The goal is to ensure Indigenous laws and knowledge systems play a significant part in helping Canada meet its international obligations for the increased protection of biodiversity, including the establishment of Indigenous Protected and Conserved Areas (IPCAs), such as Tribal Parks, and the stewardship of culturally significant plants and animals, like caribou and black ash trees, which are threatened due to climate change, habitat destruction, invasive species and other human impacts.

“We are really pleased to be part of such an exciting initiative and grateful to the Social Sciences and Humanities Research Council for this grant,” said Eli Enns, co-founder of the IISAAK OLAM Foundation, former co-chair of the Indigenous Circle of Experts (ICE) and a member of the Tla-o-qui-aht First Nation in British Columbia. “This is a significant investment that recognizes the leadership and governance of Indigenous Peoples in the stewardship of nature. The launch of the Conservation through Reconciliation Partnership coincides with an important milestone as 2019 is the 35th anniversary of the establishment of the first Indigenous Protected and Conserved Area in Canada, Meares Island Tribal Park, in Clayoquot Sound,” he added.

Under the United Nations Convention on Biological Diversity, Canada committed to conserve at least 17 per cent of terrestrial and 10 per cent of coastal and marine areas in protected areas by the end of 2020.

A report published last year by the Indigenous Circle of Experts (ICE) – an advisory group on Indigenous-led Protected and Conserved Areas – provided recommendations intended to help Canada reach its protected area targets and work toward nation-to-nation reconciliation. The report, titled We Rise Together called for formal partnerships with universities to support the establishment of IPCAs. “Our lands, waters and territories provide important habitat for most of the wildlife in Canada – from orca whales to old growth forests and our traditional knowledge systems are critical if conservation is to succeed in Canada,” noted Marilyn Baptiste, former chief of the Xeni Gwet’in First Nation in British Columbia and a member of the Conservation Through Reconciliation leadership team.

A number of IPCAs already exist in Canada and others are in the process of being established by Indigenous governments, including Thaidene Nëné, which will be formally announced by the Łutsël K’e Dene First Nation and the federal government as Canada’s newest National Park Reserve next month.

“The establishment of Thaidene Nëné protects a vast region of our traditional territories where we have lived since time immemorial. It includes important hunting and fishing grounds, habitat for countless threatened species and many sacred sites to our people,” said Steven Nitah, who helped negotiate the creation of Thaidene Nëné National Park Reserve. Nitah is also an advisor to the Indigenous Leadership Initiative (ILI) and a member of the leadership team for the Conservation through Reconciliation Partnership. “The Conservation through Reconciliation Partnership provides an excellent opportunity for similar conservation initiatives in other Indigenous territories in Canada,” he added.

The Conservation through Reconciliation Partnership will be co-led by four Indigenous conservation leaders including Eli Enns, Marilyn Baptiste, Steven Nitah and Lisa Young along with University of Guelph Professors Robin Roth and Faisal Moola. Together they will be advised by an Elders and Knowledge-Holders Senate.

Featured image : The ceremonial launch of the Conservation through Reconciliation Partnership was held on 4 May 2019 in Montreal. © Jeremy Williams / River Voices Productions.