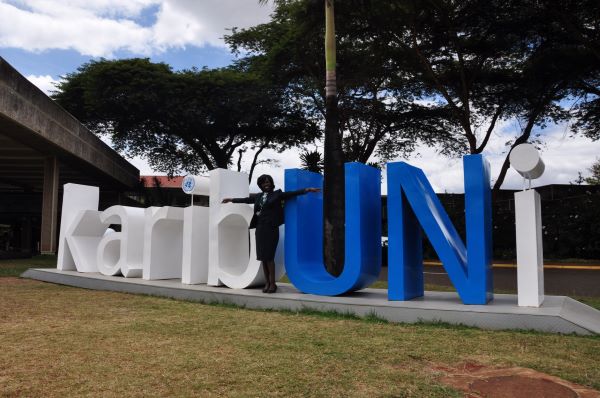 This is the second update on the United Nations Convention on Biological Diversity (UN CBD) process to develop the post-2020 global biodiversity framework, including on the CBD Working Group meeting from 27-30 August 2019 at the UN compound in Nairobi. For the first update – focusing on the regional and thematic consultations held up to May 2019 – please see: The Journey to Kunming: Advocating for territories of life in the CBD post-2020 global biodiversity framework. Subsequent updates will be shared on the ICCA Consortium website as the process develops.

Supporting an ecosystem of collective actions

These are just a few of the words and feelings invoked by pastoralists, farmers and fisherfolk from across Africa at the closing of a powerful workshop in Nairobi, Kenya. Organised by Natural Justice (ICCA Consortium Member) with the support of SwedBio (ICCA Consortium partner) from 24-25 August 2019, the gathering aimed to support representatives of indigenous peoples and local communities – including from ICCA Consortium Members – to prepare for the first meeting of the UN Convention on Biological Diversity (CBD) Working Group that will develop the post-2020 global biodiversity framework. The workshop provided a welcoming space to reflect on their communities’ struggles and visions for the future and to learn about the CBD, what to expect and how to effectively participate in UN negotiations. In addition to forging important bonds and friendships that would help each other through the week, the community representatives – many of whom were attending a UN meeting for the first time – also gained confidence and newfound skills such as talking to country delegates and drafting oral statements. This preparatory workshop proved crucial for their participation in the Working Group meeting from 27-30 August 2019 at the UN compound in Nairobi. In addition to actively engaging in the main caucuses (the International Indigenous Forum on Biodiversity, CBD Alliance, Global Youth Biodiversity Network and Women’s Caucus), indigenous and community representatives from around the world prepared and delivered oral statements in plenary, organized peaceful demonstrations to raise public awareness and political will and spoke with government delegates from their countries about their communities’ concerns. Each person contributed something unique and important to the ecosystem of collective actions, underscoring the need for diverse life experiences and perspectives to inform UN decision-making processes. “Sometimes it falls upon a generation to be great…”

CBD Executive Secretary Dr. Cristiana Pașca Palmer opened the first meeting of the Working Group on the post-2020 global biodiversity framework by quoting the great Nelson Mandela: “Sometimes it falls upon a generation to be great. You can be that great generation. Let your greatness blossom.” She encouraged delegates to be bold, be brave and work together “to bend the curve” towards the CBD’s 2050 Vision of “living in harmony with nature.” Held from 27-30 August 2019 at the UN campus in Nairobi, this was the first of three official Working Group meetings that will negotiate the structure and content of the global biodiversity framework before its adoption at the 15th meeting of the Conference of the Parties (COP15) in October 2020 in Kunming, China. It was not a typical CBD meeting; rather than the usual negotiation of draft legal text, most discussions focused on the scope and possible elements of the post-2020 framework and the work plan for the development of the post-2020 framework, with a sprinkling of reflections on why the current Aichi Targets are not being met and debate about whether or not to develop an ‘apex’ target. The CBD Secretariat even decided to forego the usual battery of side events for a series of presentations and exercises on strategic planning and the development of “SMART” targets.

Despite this shake-up in the style and format of the Working Group meeting, the level of political will and ambition evidenced by Parties’ interventions generally fell short of the “transformative change” that they themselves agreed in 2018 would be needed for the post-2020 framework and that was underscored as essential for the future of life on Earth by the recent landmark report of the Intergovernmental Science-Policy Platform on Biodiversity and Ecosystem Services (IPBES). Civil society organisations consistently called on Parties to address the drivers of biodiversity loss – which are often the very same direct threats to ICCAs – territories of life and their defenders – but scant attention was paid to structural issues such as globally interconnected financial and investment systems that drain communities and countries of their collective heritage and concentrate extreme wealth in the hands of the few. Despite a near-constant bemoaning of insufficient financial resources to implement the Convention, most Parties have a convenient blind spot for the opportunities that lie in eliminating or reforming perverse incentives that legally prop up the main industrial drivers of biodiversity loss – and instead promote the more politically palatable notion of ‘mainstreaming’ biodiversity into key sectors and industries. Civil society concerns abound about the high potential for green-washing, financialisation and commodification of nature and the growing influence of private sector agendas in the CBD and the UN more broadly, especially with the recent announcement of the Strategic Partnership Framework signed between the World Economic Forum and UN.

The question of a possible ‘apex’ target was left unresolved by the end of the first meeting of the Working Group. While some argue that the post-2020 framework will resonate more with the public and policy-makers if it hangs on some biodiversity-equivalent of the climate process’s well-known 1.5°C target, others contend that such a singular and simplistic target would be unrealistic and borderline irresponsible given the inherently complex nature of biodiversity and the multiple actions required to address its precipitous decline. Although IPBES and a growing body of peer-reviewed literature have confirmed the significant contributions of indigenous peoples and local communities to biodiversity conservation, CBD Parties tend to stay in the safe zone of recognizing traditional knowledge and customary sustainable uses of biodiversity in accordance with Articles 8(j) and 10(c) – rather than bringing the Convention into the 21st century and addressing the more fundamental issues of indigenous peoples and local communities as rights-holders (not mere stakeholders) with unique worldviews and customary laws and rights to self-determination and self-governance. Although CBD Parties often rebuke explicit references to human rights by invoking the Convention as an environmental treaty, evidence is growing of the interconnections between human rights and biodiversity and pressure is mounting to adopt a human rights-based approach in the post-2020 framework – especially with rising attacks on people and organisations defending nature against dominant political, legal and economic forces. Doubling down on the journey to Kunming

Will our generation respond to Madiba’s call and be ‘great’ enough to usher in the genuine transformative change that our planet and societies so desperately need? The stakes have never been higher and certainty never greater about the scale and severity of the global crises we are facing today and for the foreseeable future. Although the post-2020 global biodiversity framework will by no means be a silver bullet, the process to develop it provides an acute opportunity for indigenous peoples and local communities and their allies to show unity in diversity, draw strength and solidarity from concerted collective action and provide the wisdom, leadership and inspiration to redefine our relationships with Mother Earth and each other.

The ICCA Consortium and several of our Members will continue to actively participate in this process, including in forthcoming meetings of the Working Group and subsidiary bodies as well as thematic consultations and independently organised events. We will focus on centring indigenous peoples and local communities in this process and elevating their self-determined concerns and priorities – including appropriately recognizing their collective territories of life, ensuring that any conservation and restoration measures respect their rights and responsibilities, halting drivers of biodiversity loss and protecting the peoples and communities who are putting their lives on the line to defend their territories and nature.

For more information about the 1st meeting of the CBD Working Group on the post-2020 global biodiversity framework, please see: