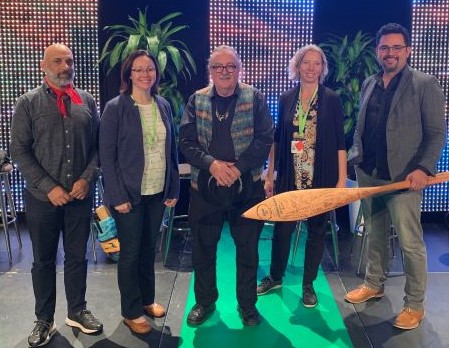 The Conservation through Reconciliation Partnership is a $2.5 million, seven-year project funded by the Canadian government through the Social Sciences and Humanities Research Council (SSHRC). The project involves more than 30 partners*, including Indigenous Nations and organizations, university-based researchers, government agencies, and conservation organizations. Building on the work of the Indigenous Circle of Experts in 2017-2018, the Partnership establishes an agenda for research and knowledge mobilization to foster Indigenous-led conservation while critically evaluating the extent to which Canada’s conservation agenda contributes to reconciliation and decolonization.

To achieve its goals, the Partnership will foster the development of the Canadian IPCA Alliance, a network to share knowledge, build capacity, and secure funding for IPCAs. The Partnership will also promote ethical and relevant research to support IPCAs, responding to existing and emerging research needs. Finally, the activities of the Partnership will build capacity among Indigenous Nations and communities, the conservation sector and the general public by hosting dialogues and developing training materials such as the Solutions Bundle.

On October 9, during the Canadian Parks Conference in Québec City, the official website for the Conservation through Reconciliation Partnership was launched: https://www.conservation-reconciliation.ca

This initiative comes at an opportune time in Canadian conservation history. Canada Target 1, which was designed to articulate the domestic application of Aichi Target 11, calls for the conservation of 17% of terrestrial areas and inland water through networks of protected areas and other effective area-based conservation measures by 2020. As of spring 2019, the area protected was 11.8%.

In the 2018 budget, the Canadian government committed an unprecedented $1.3 billion over the next five years to create new protected areas. In 2019, 27 IPCA projects across Canada were among 67 projects to receive funding through this program, and a second round of proposals will be announced in the near future.

Indigenous communities across Canada are proposing new Indigenous Protected and Conserved Areas (IPCAs). Some have been recently completed, including Thaidene Nëné in the Northwest Territories and the Tallurutiup Imanga National Marine Conservation Area in Nunavut.

Other IPCAs have received federal funding to advance their proposals through the Pathway to Canada Target 1. These include the Kaska Dena Nation’s plans for an IPCA over 40,000 square kilometres of mountains and forests in northern British Columbia and the Ktunaxa Nation’s proposal to protect Qat’muk, a sacred mountain and grizzly bear habitat in southeastern British Columbia’s Rocky Mountains. In northern Québec, the Cree Nation Government has announced its intention to work with the Québec government to achieve protected status for 30% of the Cree territory of Eeyou Istchee as a pillar of the Cree Regional Conservation Strategy. The total area of the new protected area proposals is some 80,000 square kilometres.

As Canadian governments begin recognizing and prioritizing IPCAs as a way to achieve Canada Target 1 (Aichi Target 11), there is a need for critical analysis, knowledge mobilization, and capacity-building for all partners. In order to truly decolonize conservation in Canada, Indigenous communities must remain in control of how IPCAs are recognized. Support is needed to ensure that new IPCA designations and all existing protected areas uphold the self-determination, values, and needs of Indigenous Nations, Peoples, and communities.

That is the purpose of the Conservation through Reconciliation Partnership.

Featured image: Some members of the leadership team of the CRP and one of its elders- from left to right: Dr. Faisal Moola, Lisa Young, Elder Larry McDermott, Dr. Robin Roth, and Eli Enns. Photo credit: Monica Shore, © Conservation through Reconciliation Partnership.

* The ICCA Consortium and several of its Canada-based Members and Honorary members are partners and collaborators in the Conservation through Reconciliation Partnership.