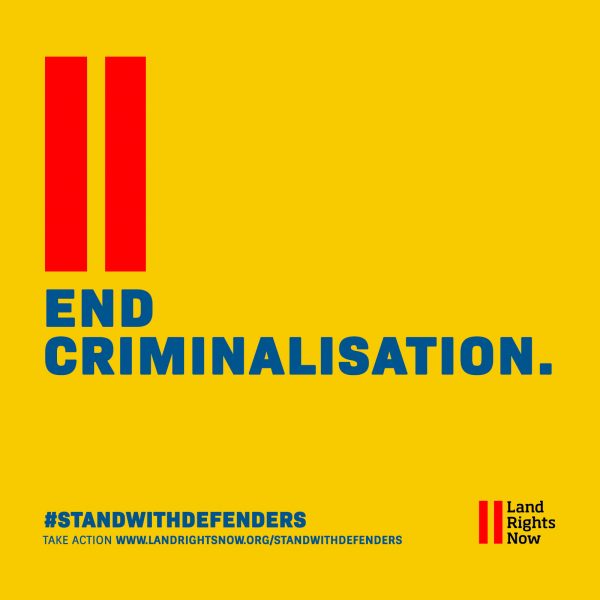 Indigenous peoples and local communities are subjected to multiple forms of harassment and violence for standing up against the dominant forces that have created our current ecological and climate crises. They are often criminalised for their brave actions – labelled as terrorists, jailed without charge and taken to court in places with little to no rule of law.

From 2-9 December 2019, culminating in International Human Rights Defenders Day, Land Rights Now organised a global mobilisation against criminalisation in collaboration with other members of the Defending the Defenders Coalition, including the ICCA Consortium and our Members Observatorio Ciudadano and Natural Justice. This global mobilisation called on governments and corporate actors to protect and end criminalisation of those who are protecting Mother Earth. It featured several individuals and communities who are resisting destructive industries and defending their territories and collective lands against threats such as mining, dams and agribusiness.

Throughout the week, millions of people around the world joined the call to #StandWithDefenders. They held public meetings, workshops and protests in Nepal, Mexico, Paraguay, Cameroon, and Spain. Indigenous peoples and local communities in Guatemala, Thailand, Cameroon and the Philippines sent out powerful messages. Millions of people online expressed their unwavering support for defenders: three million people watched the videos, over 50,000 people shared one of the spotlight cases and several thousand people signed the petitions calling for justice.

Learn more about the global mobilisation through a short film (in English, Spanish or French), the ‘spotlight cases’ in Guatemala, Chile, Colombia, El Salvador, India and the Philippines, and a policy brief supported by the ICCA Consortium. If you are interested to get involved in the ICCA Consortium’s efforts to defend territories of life and their defenders, please read our policy on this topic (in English, Spanish or French) and contact info@iccaconsortium.org.