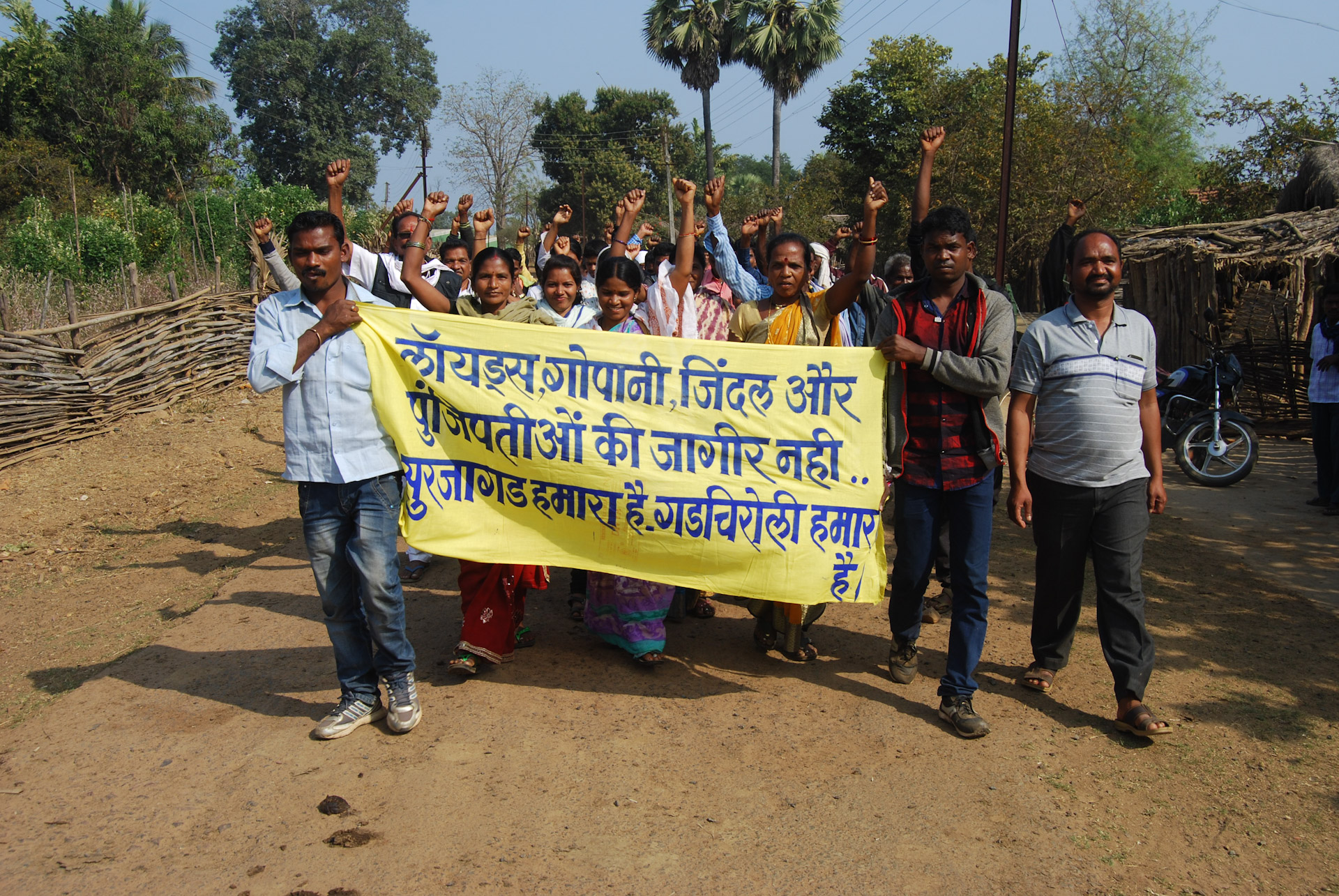 Members of 70 village gram sabhas gathered to discuss and resist mining in their sacred forests of Surjagad in Gadchiroli district of Maharashtra in India. Credit: Neema Pathak Broome.

Conservation of biodiversity is most effective when undertaken by communities whose territories of life and very identities and cultures depend upon it. This is the case with communities of Korchi Taluka in Maharashtra, India, who have managed to use their self-organised systems (gram sabhas) to defend their territories and resources despite facing a series of destructive mining proposals. They have shown resilience throughout the push for mining while offering transformative alternatives, which are not being considered or respected by the Indian government. The communities’ efforts have been documented and shared publicly through (among other things); a chapter in a prestigious Routledge book, a detailed article, a news article on The Hindu, and some short films. Community attempts to seek a resolution with the local and national authorities have not yet been fruitful.

In the current phase of further threats from mining, the ICCA Consortium has written a letter of support to the District Collector of Gadchiroli district, calling on the authority to respect the solidarity and efforts of the gram sabhas in conserving the forests and the importance of such efforts to the local communities and the globe. The ICCA Consortium stands in solidarity with the gram sabhas and their supporters within India and around the world. Read the letter below and attached (PDF file).

We are writing to you on behalf of the ICCA Consortium, a global membership-based association dedicated to supporting Indigenous Peoples and local communities who are protecting, conserving and defending their collective lands and territories of life. We have organisational Members and individual Honorary members in more than 80 countries around the world and have observer status with the UN Convention on Biological Diversity and the UN Economic and Social Council.

Through our membership in India, we have had the distinct honour of hearing about, learning from and being inspired by the village gram sabhas of Korchi Taluka and their various collectives, including the federation of gram sabhas (Mahagramsabha), the federation of sarpanches (Sarpanch Sangathana), and the federation of the women’s self-help groups (Mahila Parisar Sangh). Looking at the current global context, biodiversity is in severe decline, climate breakdown is threatening the very survival of humanity, and zoonotic diseases and pandemics are on the rise. The gram sabhas of Korchi taluka are a powerful embodiment of transformative grassroots initiatives that are leading the way in restoring a healthier balance with the planet on which we all depend. They are part of a local-to-global movement that is gaining significant attention and momentum around the world, including from multilateral institutions such as the Convention on Biological Diversity.

The gram sabhas’ dense and biologically diverse forests are sacred for the communities and habitat for charismatic species such as tigers and leopards, among many others. Their efforts are documented in the public domain (for example, in a chapter in a prestigious Routledge book, a detailed article, a news article on The Hindu, and some short films). The Korchi gram sabhas have demonstrated that by restoring, conserving and sustainably managing their forests and biodiversity, their subsistence can be ensured even in the toughest times, while also providing substantial livelihoods. Indeed, many people who earlier worked as migrant labour now find better employment within or in the vicinity of their villages. During the initial days of the pandemic and related lockdown measures, they were among the first gram sabhas in the country that came forward to support their members by providing basic necessities, using the funds that they had generated from the forest-based activities. These gram sabha members are also actively working towards strengthening their decision-making processes, making them more transparent and inclusive of women, youth and others in the community.

Any country should be proud of and actively support self-organised efforts like those of the gram sabhas in Korchi. However, we are deeply concerned to hear that the Maharashtra state government is still considering mining proposals in these forests, despite strong opposition from the local gram sabhas, as evidenced by numerous resolutions and submissions to the local, district and state administration and government. Mining in such areas would irreparably damage the forests and community institutions and knowledge and practice systems that directly depend upon the forests, thus going against the Indian government’s commitments under several international instruments, including the UN Convention on Biological Diversity.

We are herewith attaching a resolution that we understand a number of local communities have already submitted to you. We implore you to respect the immense and immeasurable values of these forests, not only locally but also globally, as a contribution to biodiversity restoration and climate change mitigation and adaptation in these times of great uncertainty. As we stand in solidarity with the gram sabhas and their supporters within India and around the world, we urge you to order the withdrawal of the mining proposals now and for posterity. We look forward to your positive response and bold action for current and future generations.