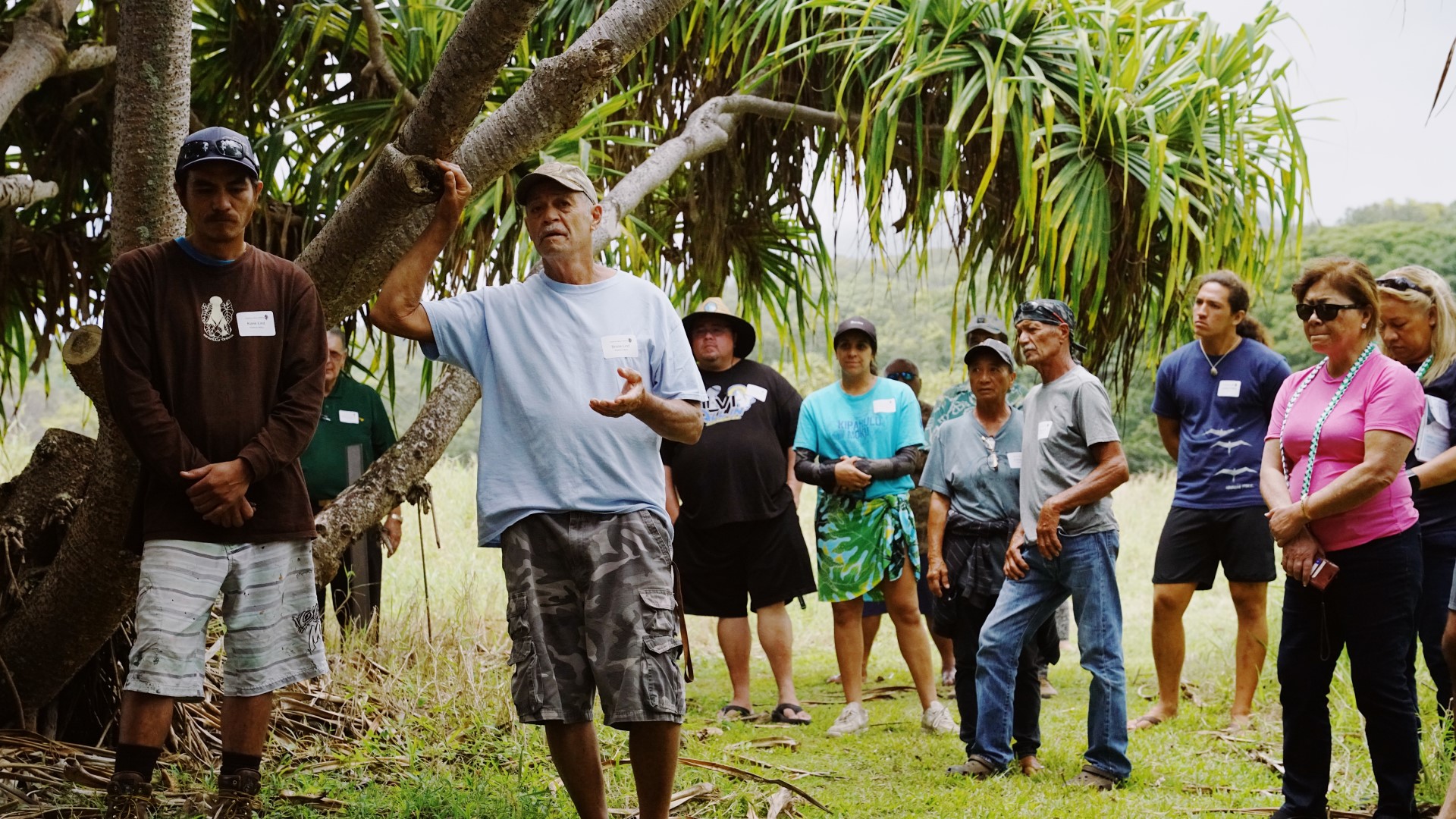 This year, World Oceans Day saw fishing communities on Maui and Hawaii islands celebrate milestones in progress towards adopting rules for Community-Based Subsistence Fishing Areas (CBSFA). The rules reflect the wisdom and practices of kupuna (elder practitioners) and the passing on and preservation of ike (knowledge) to a younger generation of fishers so that they can continue to feed their families from the abundance of their “ice box” in the ocean

On June 7, the Kīpahulu ʻOhana on Maui met with about 100 members of the community to hear comments on a set of rules developed by members of lineal lawaiʻa (fishers) families over the last few years. Their efforts were inspired by similar community efforts at Moʻomomi on Molokaʻi island and Hāʻena on Kauaʻi island.

A rule package Scoping Meeting hosted by the DLNR-Division of Aquatic Resources (DAR) addressed community members’ questions about the rules and noted suggestions for modifications. Led by DAR’s Adam Wong and facilitated by Luna Kekoa, the meeting allowed for an in-depth discussion of the reasons for bag limits, restrictions on modes of fishing, and extensions of the kapu season. Several people thanked Kīpahulu ‘Ohana for their efforts. The next step will be to finalize DAR’s draft rules and request a formal public hearing from the Board of Land & Natural Resources (BLNR) under the Chapter 91 Administrative Rule-Making Process.

On June 9, following World Oceans Day, the BLNR held a decision-making hearing to adopt proposed CBSFA rules shepherded by the community organization, Kalanihale, on behalf of the Fishing Village of Miloliʻi, Hawaiʻi island. That hearing resulted in BLNR’s adoption of the rules, which now await the Governor’s signature. The vote was unanimous. The public process for Miloliʻi leading up to adoption drew strong community interest and support, with more than 150 people attending in-person or virtually or submitting testimonials at DAR’s first hybrid public hearing. Both meetings posed concerns in the shadow of COVID, but virtual meetings helped broaden access for many who might not otherwise have been able to attend the hearing in person.

The presence at both events of three generations of lawaiʻa (fisher) families with a long history of subsistence from the ice box of their ocean speaks for a more responsible and sustainable future in how we steward the resources gifted by the planet.

“This is about the lawai`a of Miloliʻi self-managing their harvests and caring for their marine resources.  Pursuing a Community-Based Subsistence Fishing Area (CBSFA) designation is a reclamation of what was old, made relevant for today – codifying traditional and customary practices into new fishing rules, promoting lawai`a pono (responsible fishing). CBSFAs allow the DLNR to leverage community-based knowledge and cooperation to implement fishery governance and truly sustainable management strategies,” said Uʻilani Naipo, a key member of one of the fishing families of Miloliʻi. The latter has been steadfast in using traditional knowledge to mālama their ice box.

The families act from a deep sense of their responsibility to steward the ocean’s resources. Their actions are based on kilo (careful observation).

Once the governor signs off, the state and the community will transition into a collaboration to co-manage the CBSFA.  As keepers of generational place-based knowledge, Miloliʻiʻs Mohala Nā Konohiki -a traditional fishery management program- apprentices will co-manage the CBSFA by helping to survey and monitor. “I am committed to monitoring our marine life through managing what I harvest and what I see others harvest,” says Mohala Nā Konohiki apprentice Darrell Lopez.  Another Konohiki apprentice, Melissa-Ann Māhealani Waite-Crawford, said, “My children will one day rely on our resources. But those resources wonʻt be here if we donʻt do our part to take care of it now.”

Kuaʻāina Ulu ʻAuamo (KUA) means “grassroots growing through shared responsibility.” KUA is a movement-building non-profit organization that works to empower communities across Hawaiʻi to mālama (care for) their environmental heritage and work toward a shared vision of ‘āina momona—abundant, productive ecological systems that support community well-being. Founded in 2012 by grassroots indigenous and local community-based natural resource management initiatives, KUA employs a community-driven approach that provides backbone support and facilitation for three statewide networks: E Alu Pū, Hui Mālama Loko Iʻa, and the Limu Hui. All three networks bring together community stewards and partners such as educators, researchers, and supporters across Hawai‘i. They are committed to protecting and perpetuating ancestral Hawaiian wisdom and practices that have allowed communities to thrive for generations. Western-style economic development and the intrusion of new technologies threaten the preservation of those practices. CBSFAs are a response to that threat, and the state agency’s unanimous adoption of the rules are signs of progress that signal a positive shift in how quickly and fully government supports, partners, and responds to grassroots efforts.