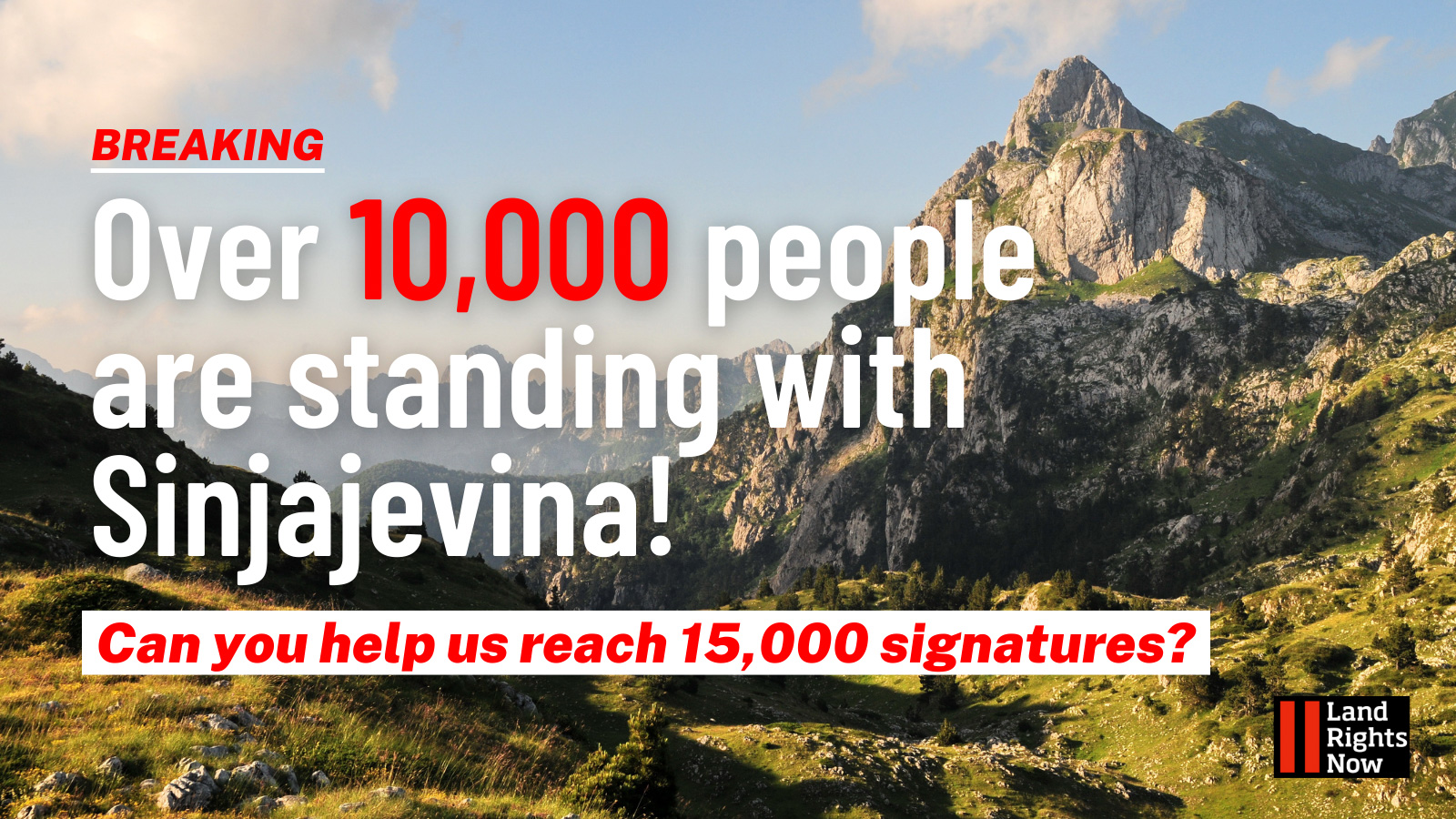 In conjunction with a solidarity camp from 8-15 July, partners in the Save Sinjajevina campaign share a press release for global dissemination

Local and international environmental and human rights groups have urged the Montenegrin government and the European Union to scrap the project to militarize the Sinjajevina highlands and to listen to the demands of local communities living from this territory. Nevertheless, almost three years after its creation, the government of Montenegro still has not canceled the military ground.

At the heart of Montenegro, the Sinjajevina region is home to over 22,000 people living in small towns and hamlets. Part of the Tara River Basin Biosphere Reserve and bordered by two UNESCO World Heritage sites, Sinjajevina’s landscapes and ecosystems have been shaped by pastoralists over millennia and continue to be shaped and conserved.

Repeated actions by the government of Montenegro to convert a large part of this traditional and unique pastoral territory into a military training ground led local communities and civil society groups to mobilize, based on scientific research, for the defense of these highly valuable pasturelands and cultures, to establish a community-led protected area.

Several local and international organizations have expressed solidarity with local communities in Sinjajevina. Milan Sekulovic, President of the Save Sinjajevina Association (ICCA Consortium Member), highlighted that “if Montenegro wants to be part of the European Union, it must respect and protect European values, including the EU’s Green Deal, the Natura 2000 area proposed by the EU in Sinjajevina, and the EU’s biodiversity and natural habitats strategy. Moreover, militarizing the region is in direct contradiction with the recommendation of a 2016 study co-funded by the EU supporting the creation of a protected area in Sinjajevina by 2020.”

Together with its allies around the world, the Save Sinjajevina Association launched a petition addressed at Olivér Várhelyi, EU Commissioner for Neighbourhood and Enlargement, urging the EU to ask for the removal of the military training ground in Sinjajevina as a pre-condition for Montenegro’s accession to EU membership.

“In addition to losing access to traditional pasturelands, we fear that the militarization of our territory will lead to pollution, reduced ecological and hydrological connectivity, damage to wildlife and biodiversity as well as to our animals and crops. If our natural resources, traditional products and landscapes lose value, up to twenty thousand people and their businesses could be seriously affected,” explained Persida Jovanovic, who is from a family of farmers of Sinjajevina.

“This is an evolving crisis in Sinjajevina’s territories of life,” stressed Milka Chepkorir, Coordinator of defending territories of life of the ICCA Consortium, one of the key supporters of the petition. “Occupying private and common lands in Sinjajevina, where a military testing range was opened in 2019 while people were still on their pastures, severely threatens pastoralist and farming communities and the unique ecosystems they care for through their ways of life.”

“Sinjajevina is a global cause. We are very concerned about pasturelands becoming inaccessible to those who have managed them sustainably for centuries, creating a unique biodiversity,” added Sabine Pallas of the International Land Coalition, a global network that welcomed the Save Sinjajevina Association as a member in 2021. “Securing the rights of local communities to their territories is the best strategy to protect nature and reverse the degradation of ecosystems.”

David Swanson from World BEYOND War affirmed that “to recognize the outstanding work that the Save Sinjajevina association has done to defend the rights of local people as a step forward towards building peace and reconciliation in the region, we granted them the War Abolisher of 2021 Award”.

All supporters of the Save Sinjajevina campaign urge the government of Montenegro to immediately withdraw the decree creating a military training ground and to create a protected area co-designed and co-governed by Sinjajevina’s local communities.

“The pastoralists of Sinjajevina should have the last word on what happens in their territories,” said Clémence Abbes, Coordinator of the Land Rights Now campaign, a global alliance co-convened by the International Land Coalition, Oxfam and the Rights and Resources Initiative. “These local communities have created, managed and conserved a uniquely valuable landscape, which is increasingly rare in Europe, and wish to be at the center of the conservation, promotion and governance efforts of their territory. The EU should support secure land rights for local communities as part of their 2030 Biodiversity Strategy.”

On 18 June, hundreds of local pastoralists and farmers celebrated the Day of Sinjajevina in the capital Podgorica with participation of local and national government officials and the EU Delegation to Montenegro (see update in Serbian). So far, this support has not materialized into a decree canceling the military ground or the creation of a protected area, which was originally planned to be set up by 2020. Further events in July will continue to press the Government in that direction.

The Save Sinjajevina Association and allies are organizing a Solidarity Camp from July 8-15.

On Tuesday 12 July, on Petrovdan (St. Peter’s Day), hundreds of people from different countries are expected in Sinjajevina to learn about the way of life of its inhabitants and the importance of its landscapes through the social celebration of this day along with a farmers’ assembly, workshops, talks and guided tours.

On Monday 18 July, participants will join a march in Podgorica (Montenegro’s capital) to deliver thousands of signatures collected in the petition to the Prime Minister, Minister of the Defense and the European Union delegation to Montenegro.

In addition, World BEYOND War will hold its annual global conference online from 8-10 July with speakers from Save Sinjajevina, and a Youth Summit from 13-14 July in the foothills of Sinjajevina.

Register for the Sinjajevina solidarity camp in July in Montenegro: https://worldbeyondwar.org/come-to-montenegro-in-july-2022-to-help-us-stop-this-military-base-for-good/

For European and global media in English language enquiries:

For European and global media in German language enquiries:

For European and global media in French language enquiries or scientific data:

For European and global media in Spanish language enquiries: