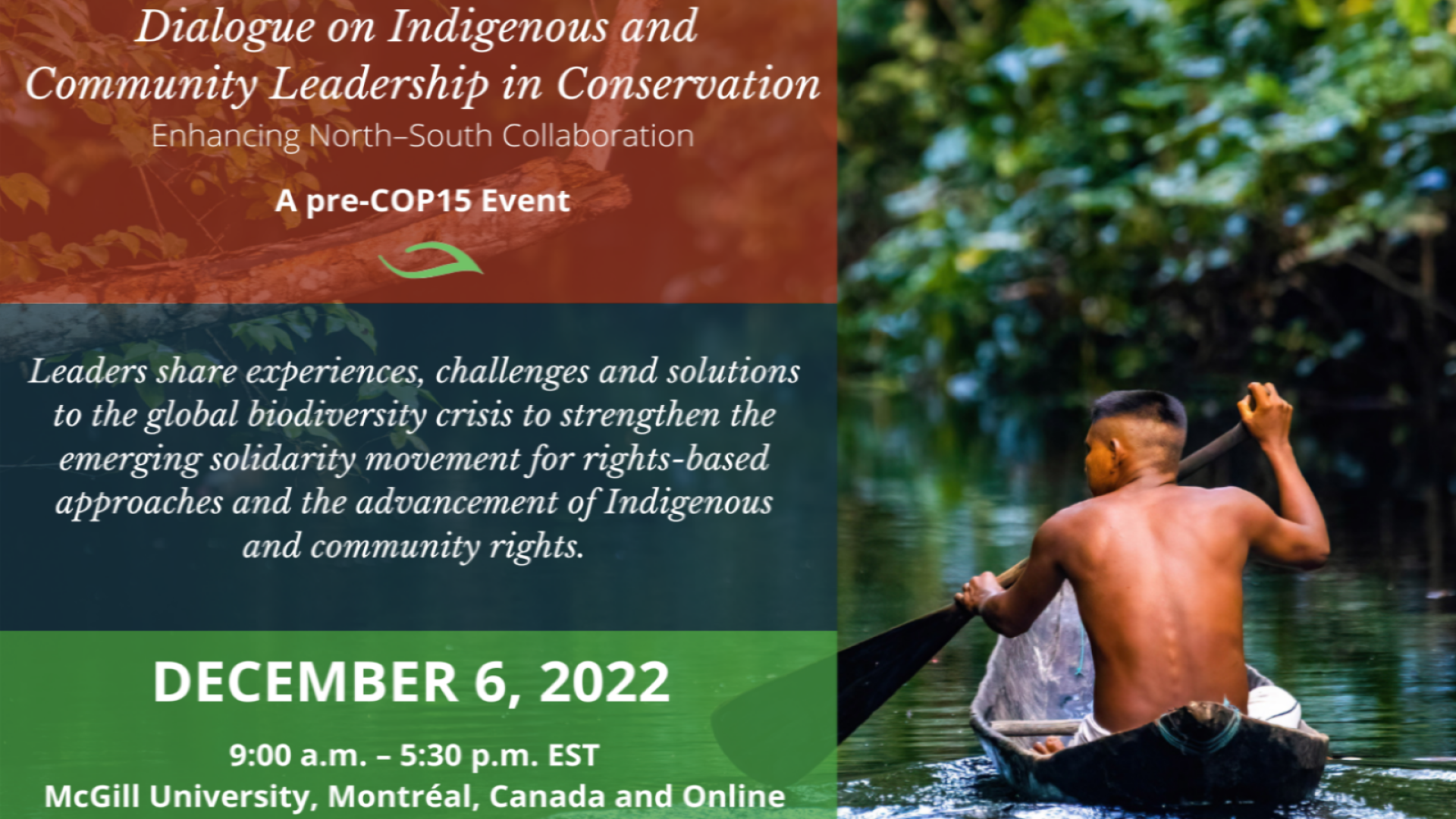 On December 6, Rights and Resources Imitative, the Conservation through Reconciliation Partnership (CRP), and the ICCA Consortium—in partnership with the Canadian Research Chair in Human Rights, Health, and the Environment, Montreal International and the Christensen Fund—will co-host a pre-COP15 dialogue on Indigenous and community leadership in conservation

By RRI, ICCA Consortium and CRP

Click here to register to attend the event in person or online. Spaces are limited. For questions or interview requests, contact Nicole Harris.

Indigenous Peoples and local communities across the world have protected their lands for thousands of years. From the tropical forests of the Congo Basin and the riverbanks of the Amazon to and the lands, forests, and waters of Turtle Island (North America), Indigenous Peoples and local communities have lived in relation with nature and helped shape biodiverse and resilient landscapes.

Despite the clear evidence that such guardianship leads to widespread social and ecological benefits, the critical role Indigenous and community rightsholders play in biodiversity conservation and climate mitigation and adaptation has not been appropriately recognized, nor protected by governments in the global North and South alike.

On December 6, 2022, Indigenous and local community leaders from the global North and South will participate in a pre-COP15 dialogue to share their local place-based knowledge—including experiences, challenges, and solutions to the global biodiversity crisis—to strengthen their solidarity movements ahead of the Conference of the Parties to the UN Convention on Biological Diversity (CBD COP15), scheduled for December 7–17 in Montréal, Canada.

Indigenous Peoples and the colonial history of conservation

For rights-based conservation to be successful, it is essential to understand the colonial history of conservation. An anti-colonialist stance is a necessary part of the reconciliation process.

“Today, we see the impact of colonialism on everybody, through climate change. Throughout history, settlers treated the land like they treated Indigenous Peoples: with total disrespect, total control for economic gains,” said Steven Nitah, an Indigenous leader from the Łutsël K’é Dene First Nation and Managing Director of Nature for Justice Canada.

In Africa, while much has been said about the importance of Indigenous and local communities’ role in conservation, a lot remains to be done to entrench a truly human rights-based approach in the quest for biodiversity conservation on the continent. Fortress conservation projects are numerous and those touted as “community-driven” in theory are often hostile toward communities resulting in numerous human rights violations including land dispossession, weakening of Indigenous governance systems, and extra-judicial killings. Not only is this counterproductive and unsustainable on an environmental level, but it also goes against the communities’ rights and violates human rights.

In Latin America, Indigenous Peoples, Afro-descendant Peoples, and local communities have inhabited and possessed rights over ancestral territories for centuries. This translates into a bond that transcends the material and is linked to their development and collective identity. When a collective territory is violated, as with colonial dispossession or fortress conservation, multiple rights are violated simultaneously with both short and long-term consequences.

Thus, murder, threats, displacement, water pollution or the destruction of ecosystems are not isolated events, nor do they affect only one person or family: an attack on an individual is an attack on the entire community and surrounding areas.

“Here, we stand for our rights. We are all united because we have the same cause. The interest of the community is in the interest of all,” said Fernanda María of the Laranjeiras community in Brazil.

In Canada, research shows that the First Nations, Inuit, and Métis achieve better conservation outcomes, and at a much lower cost, when compared to private and state-led initiatives. For example, the Indigenous Guardians Program achieves CA$2.50 worth of social, cultural, and environmental benefits for every dollar invested in the program.

Indigenous and community Elders contribute greatly to these efforts and hold the knowledge of their ancestors. One of their greatest responsibilities is to ensure that there is a future for the next generation—and that’s where Indigenous and local women and youth leadership can play a role.

“Indigenous, Afro-descendant, and local community women and girls should be leaders of climate action, not victims of climate policies,” said Archana Soreng, a climate activist from the Kharia Tribe in India and member of the UN Secretary General’s Youth Advisory Group on Climate Change.

On December 6, Indigenous and local community leaders will highlight the necessity for increased global North-South collaboration as well as the creation of an ethical space—as Steven Nitah defines it—where it is possible to safely share Indigenous worldviews, cosmovisions, and lived experiences to co-create new knowledge systems. The event will provide a progressive alternative to official spaces centered on rights-based approaches that are beneficial to Indigenous Peoples and local communities.

It is crucial that social movements coordinate to forge new paths forward for increased global collaboration on Indigenous and community leadership in conservation. Ahead of the negotiations at COP15 and the post-2020 Global Biodiversity Framework, this dialogue aims to do just that.