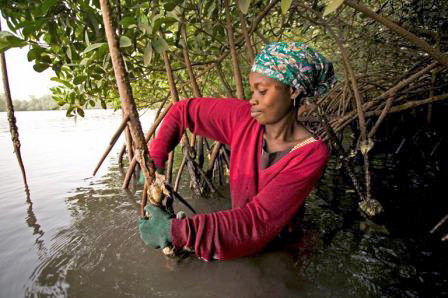 A local woman in the mangroves in the Gambia. Photo: Grazia Borrini-Feyerabend

Opinion: The “30 by 30” campaign for marine protected areas will marginalize the very people who – far from contributing to the problem – have long been a big part of the solution

Unsustainable development and huge extractive industries have led to this current state of ecological crisis. We are facing massive and increasing threats to biological as well as cultural diversity across the world. We all are concerned, and many of us, many communities and nations across the world are trying to sustain the diversity of life and conserve our territories.

In response to the biodiversity crisis, some multinational environmental groups based in the global north and increasing numbers of governments are rallying behind a campaign with a catchy slogan: 30 by 30. The campaign calls for the “protection” of thirty percent of the global land and ocean by 2030.

By using the word “protection” without nuance, the campaign promotes the establishment of marine protected areas in thirty percent of the ocean areas, which could severely restrict activities like subsistence and small-scale fishing. This campaign is promoting the inclusion of this target in the Convention on Biological Diversity’s post-2020 global biodiversity framework, which will set biodiversity and nature conservation law and policy for at least the next decade.

In this campaign, we see the passion to “do something.” We also see the simplicity of finding a catchy slogan that people can use as a rallying cry to sustain and restore biodiversity. Prima facie, this campaign can seem to be the right one, but it is not.

This proposed “protected” area target certainly is not a match for the crises we are facing. The many aspects of the interlinked biodiversity, climate, and inequality crises are overlooked in this campaign. And the complexities of these crises in many parts of the world, including in the large ocean states, are not considered in this campaign. It does not consider whether and how this proposed action addresses the main driving forces behind the planetary crisis. Poor regulation by governments of the most powerful and destructive (ab)users of the environment will not be addressed by the declaration of large areas under “protection.” All too often, the most destructive fisheries are allowed or even subsidized to continue unabated, while subsistence and community fisheries are criminalized.

There is every reason to expect this campaign could disproportionately affect those less powerful. Because the target does not adequately consider the issues of the sovereignty of Indigenous nations, territorial integrity of Indigenous peoples, and rights of Indigenous peoples and local communities, it will not even allow those most affected to meaningfully participate let alone decide about the conservation of their territories. This campaign stands to further increase the inequity that is already a hallmark of the environmental destruction that has benefitted so few at the expense of the vast majority.

Indigenous peoples and local communities contribute hugely to biodiversity by conserving their collective lands and territories of life. This is already recognized in many CBD decisions and policies of conservation organizations. The proposed 30 by 30 target could significantly disrupt Indigenous peoples’ and local communities’ governance, management, and conservation systems across all aquatic territories of life, in both in-shore and offshore areas. Children play near a fisherman, and a bucket of Dorado (dolphinfish) on the Pacific coast of Tarcoles, Costa Rica. In December, Summer in Costa Rica’s Pacific coast brings rising catch of Dorado and a little more income for artisanal fishing communities. When fishers make it to the shore with the catch the family is always there to welcome them. Photo: Vivienne Solís Rivera/ CoopeSoliDar R.L.

These communities do not want their territories to go under what the 30 by 30 campaign is calling the “protected” category. They do not want their efforts to be used to make up for the shortcomings of government and corporate responsibility for safeguarding the environment.

In many countries, there are no adequate provisions for public participation in environmental governance and in the process of establishing “protected” areas. For Indigenous peoples, even the process of seeking free, prior, and informed consent has become a challenging and often manipulated one. And for many years, many have been working extremely hard to try to ensure that Indigenous peoples and local communities have meaningful involvement in decisions over their lands and territories.

A major concern is that in the past, this kind of “protected” area target has led to the disenfranchisement of people from having a fair say about what happens in their territories or even countries. The countries that are most eager to adopt this new 30 by 30 campaign are currently no different and are extremely likely to disenfranchise local and indigenous people in the process.

In the ocean, “protected” areas take on a completely different aspect and this campaign disproportionately affects large ocean island states in the Pacific and elsewhere. Countries are being encouraged to declare large Marine Protected Areas – at least 30% of their territory – and yet most of this area is the relatively “empty” ocean.

People’s livelihoods depend largely on the inshore coral reefs, mangroves, and other habitats along with the associated fauna. If there is a political and financial commitment would it not make more sense to work with the coastal communities to reduce the threats to ALL reefs, mangroves, and coastal resources? Indigenous peoples and local communities contribute hugely to biodiversity by conserving their collective lands and territories of life. In this photo, Indigenous rangers in Dhimurru Aboriginal Area on the Arafura sea take care of a sea turtle. Photo: Grazia Borrini-Feyerabend

On the other hand, the threats in the open ocean do not respect “protected” area boundaries just as most of the commercially valuable species do not either. Tuna, for instance, migrate and spawn across many jurisdictions in the Pacific; this has led to successful international governance experiences, which do not involve “protected areas.” And that is maybe part of the reason these experiences have not been adequately considered by the conservation lobbyists.

It is disappointing that large conservation organizations continue to promote the 30 by 30 campaign without these considerations or nuances and without proper studies or consultations with Indigenous peoples and communities, who will likely be most negatively affected by decisions stemming from it. Sure, simplistic slogans and perceived panaceas make for compelling campaigns for the public.

But Indigenous peoples and communities need to figure out what sustainability means and looks like for themselves and work together on self-determined priorities and approaches, and in the process, to become less dependent on external benefactors that impose inappropriate measures.

There are many positive examples of Indigenous peoples and communities leading and contributing to conservation, sustainable use, and restoration of fisheries and ocean systems. Conservation organizations and nation-states can have a positive role to play in supporting these initiatives, but they have to start by listening.

Lack of sensitivity and discussion about these issues should not undermine the potential for harnessing solidarity and joining forces to address the major issues facing the ocean. In the case of Indigenous and local peoples as well as countries in the global South and small islands (aka large ocean states), we must be careful not to marginalize the very people who – far from contributing to the problem – have long been a big part of the solution. We call for more discussion about these issues.

Disclaimer: This content does not necessarily reflect the views of the ICCA Consortium as a whole