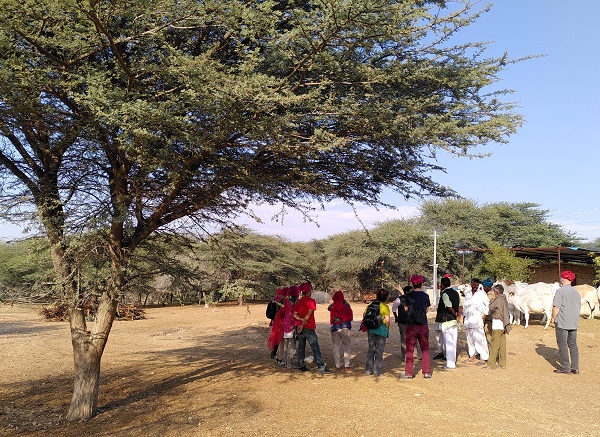 “We will be known forever by the tracks we leave.” – Dakota Sioux proverb

The end of one year and start of another – in whatever tradition you may celebrate – is often a time for reflection, release and recalibration. At the ICCA Consortium’s XVth General Assembly in December 2019, we celebrated co-founder Dr. Grazia Borrini-Feyerabend – ​who served as Global Coordinator, Strategy Advisor and Secretary of Council since its founding in 2010 – with a joyous evening of photos, videos, music and dance as she headed into a well-deserved retirement. Grazia has dedicated so many years of her life to the movement for territories of life, for which we are eternally grateful, and the many seeds she has planted are taking root around the world in myriad ways. Officially concluding a two-year leadership transition process, this bittersweet moment signalled the end of an era for the ICCA Consortium – and the beginning of a new one as it heads into its second decade. Despite the daunting responsibilities ahead, new members of the Council and Secretariat were buoyed by the palpable sense of community, connection, solidarity and support that infused the General Assembly and subsequent meetings. Grazia Borrini-Feyerabend and Ashish Kothari, among the main co-founders of the ICCA Consortium, together at the XVth General Assembly in Udaipur, India, December 2019. © Emma Courtine

On the cusp of the (Gregorian) year 2020, we parted not only with the previous year, but also with the previous decade. This was a decade marked by a shocking rise in right-wing nationalism and ‘strongman’ politics in concert with increasingly frequent and severe symptoms of climate, ecological and economic breakdown. It also saw a groundswell of powerful movements led by Indigenous peoples, youth, women and people from the Global South, underscoring the structural roots and intersectional nature of both the global crises we face and the collective actions we must take to rise above them. What will the next decade bring? Touted by many as our ‘last chance’ to repair humanity’s relationship with Mother Earth and avert complete ecological catastrophe, the years ahead are likely to see even more inequalities and injustices, mass forced migration, civil unrest and human-induced disasters. But will it also bear witness to a deep ecological and spiritual awakening? Will mainstream societies finally break their addiction to hyper-consumption and make way for diverse, regenerative and healthy local economies? We know that the collective territories and areas cared for and governed by indigenous peoples and communities – territories of life – are among the last strongholds of healthy nature, cultural diversity and thriving livelihoods. It is increasingly clear that the interconnected crises we face are the direct results of certain worldviews, ideologies and values, and not others. What we need is nothing short of system change.

As we grappled with these broader global forces in the heady first days of 2020, we were blindsided by an unimaginable loss. On 8 January, Ghanimat Azhdari – a close friend, beloved member of our Council, protégé of Dr. M. Taghi Farvar and long-time staff of Cenesta – died along with 175 others on the plane that was shot down in Iran. When I heard the news, my heart sank, leapt into my throat and broke into a million pieces all at once. As our tears continue to flow, we are channelling our grief into honouring her memory and carrying forward her life’s work with even stronger conviction. Please visit our tribute page for Ghanimat and read this beautiful profile of her in The Narwhal. “The greatness of a community is most accurately measured by the compassionate actions of its members.” – Coretta Scott King

This tragedy highlighted how quickly and brutally broader geopolitical forces and split-second moments of carelessness alike can upend lives and lifetimes of work for territories of life. However, it also led to an outpouring of messages of grief and love for Ghanimat from around the world – a global community connected through just one person that rallied to support each other through this devastating loss. It is this incredible sense of community and collective action for a shared purpose that makes the ICCA Consortium so unique and indispensible within the broader movements for territories of life and for social and environmental justice.

These movements are at the forefront of a global shift in values from selfishness, greed, arrogance and aggression toward values that embody the essence and the best of humanity: love, respect, honesty, humility, reciprocity and interconnectedness. These values are interwoven in Indigenous peoples’ and communities’ worldviews and cosmovisions and provide the moral compass for living peacefully and respectfully with each other and with the rest of Mother Earth. ​Seedlings sprouting out of a fallen tree © Holly Jonas

“[I]t’s not necessarily the largest, most courageous, or loudest animal that can do the most good or have the greatest influence. Rather, those who are not afraid to act, and who are aware of what is at stake, can make the biggest difference.” – Michelle Benjamin, in “Flight of the Hummingbird: A parable for the environment”

Perhaps the most important part of my role as Global Coordinator will be ensuring the ICCA Consortium remains true to these core values, is guided by the wisdom of Indigenous peoples and communities, honours the legacy and spirit of our founders and backs as strongly as possible the work of our Members to rise to the challenges we all face and show the rest of the world the other paths that exist.

For the year 2020, the top five priorities for strengthening the ICCA Consortium as an association are to:

The top five priorities for the ICCA Consortium’s strategic directions are to:

As we embark on this collective journey together, the pages of our future history still remain to be written. Will this history be written by the ‘victors’ of the status quo, as in eras past? Or will we transition to a new era of heightened global consciousness where we no longer define success through competition and unlimited growth, but through cooperation and compassion? This is a journey we must embark upon together as a global community, for the sake of all territories of life, ancestors and future generations.